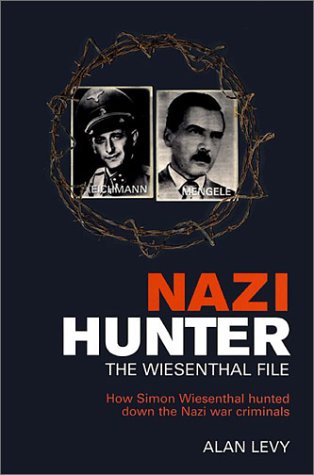 This is the remarkable story of a man who has become a legend in his own lifetime. Simon Wiesenthal spent four and a half years in Mauthausen concentration camp during the Second World War. With the exception of his wife, all his immediate family were exterminated, and he himself ended the war a living skeleton. Since then, he has achieved international renown for his tireless tracking down of Nazi war criminals—including his capture of Eichmann, the “desk murderer” who masterminded Hitler’s Final Solution, and Stangl the overlord of Treblinka—and for his pursuit of Mengele of Auschwitz, the dreaded “Angel of Death.” To this day his work continues, his motivation simply expressed in the words: “Justice, not vengeance.” The accounts of inspired detective work that lie behind Wiesenthal’s successful apprehension of the fugitives reads as excitingly as any thriller, but Alan Levy’s book is much more than that. It is an award-winning examination of the work of one of the greatest Jewish figures of the twentieth century. 8 pages of black-and-white photographs bring to life this gripping account of the life-long pursuit of justice by the man who declared “So long as the criminals are free, the war has not ended for me.” “Wiesenthal has played his part in a disturbing episode of post-war history. [A] readable and intelligent book.”—The Times (London)

Alan Levy is editor of the English-language newspaper The Prague Post and has published many previous works, including his highly acclaimed eyewitness account of the 1968 invasion of Czechoslovakia. He lives in New York.

'Wiesenthal is a unique survivor... his one purpose is that justice for the dead of Europe, those wilfully killed by his fellow Austrian, Hitler's decree, be not forgotten. To understand him read Levy's book.' - Sunday Telegraph; 'It is greatly to the credit of Alan Levy that he has dared to give us an objective account of Wiesethal's career.' - Sunday Times; '[Wiesenthal] can have no finer interpreter and sympathiser than Alan Levy, who has dealt justly with him.' - Financial Times; 'Wiesenthal has played his part in a disturbing episode of post-war history. He deserves this readable and intelligent book.' - The Times; Levy is ruthless in his determination to make every act of barbarity clear. It is impossible to turn the pages without feeling not just despair but revulsion.' - New Statesman & Society