Items related to Vapor: A Novel 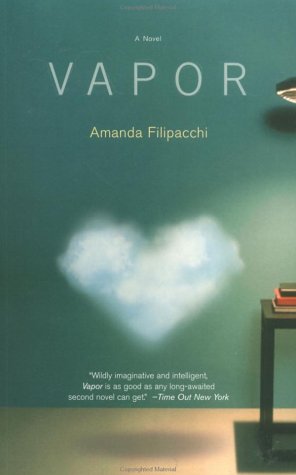 Soon to be a major motion picture directed by Neil LaBute and starring Renee Zellweger, this is a surreal love story from the author of Nude Men. Now in paperback, Amanda Filipacchi’s quirky comic romance gives aspiring actress Anna Graham a makeover that no reader will ever forget. Anna’s payback for rescuing the eccentric scientist Damon Wetly from a subway mugger is imprisonment in a specially designed cage designed to transform her into the foremost actress of her time. How Anna succeeds in both her acting career and turning the tables on Damon is a reversal of the Pygmalion myth and a perversely tender love story.

This cruelly inventive, mercilessly witty and outrageous second novel skewers the Pygmalion myth with barbs at modern neurosis, celebrity, greed and obsession. Filipacchi (Nude Men) plunges her heroine into a surreal trajectory from drama school failure to Oscar winner, satirizing the American dream every step of the way. Anna Graham, 27, passes time piercing ears, making copies at a Xerox shop, attending acting classes and thinking up ways to punish herself. That is, until the night when, dressed as the Good Fairy, she rushes onto the subway tracks to save the life of an eccentric scientific researcher named Damon Wetly, who repays her by making her fondest wishAto become a famous actressAcome true. Wetly plays Higgins to Anna's Eliza, teaching her to walk, talk, eat and think. To ensure Anna's commitment to his bizarre techniques, he holds her hostage in a cage, pelting her with ice bullets when she misbehaves and treating her to gifts and games as she makes progress. The brilliantly bizarre inverted logic of this relationship echoes elsewhere in Anna's life: when she herself is rescued from rapists, she dates her hero, who turns out to be quite a catch: a cosmetic surgeon, etiquette expert, cellist, Weight Watcher's counselor and male stripper. But Anna's metamorphosis and identity is bound, literally and irrefutably, with Damon. Filipacchi shrewdly juxtaposes human actions with contrasting desires, pitting social aspirations against antisocial ones. She quickly launches from the mundane (Anna's acting coach suggesting she give up acting) to the insane (then suggesting she give up her name to a promising actress who could make better use of it) fueled by clever language and merciless insight. Her novel showcases a prodigious postfeminist talent. Her energetic originality never falters and her unforgiving eye for the fluidity of human weakness never blinks. (May) FYI: Not to be confused with Vapors, by Wes DeMott, reviewed on March 15.
Copyright 1999 Reed Business Information, Inc.

A surreal and often frenetic trip through makeover land as a bizarre young man helps an aspiring New York actress become a star by imprisoning her in his cloud-filled home. Filipacchi (Nude Men, 1993) crafts an intriguing diversion thats as much a lighthearted meditation on the excesses of ambition as it is an unusual love story. When an acting professor tells narrator Anna Graham that she will never be an actress because shes too much herself, she is determined to prove him wrong. As it happens, while shes waiting for the subway, Anna rescues a young man whos being attacked; in gratitude, Damon Wetly asks her out to dinner, and, after she tells him about her acting ambitions, lures her to his country house, where he closes her up in a specially designed prison. Damon, a scientist working to create solid clouds, is exquisitely sensitive to moisture and weight. Anna initially tries to resist the program of education hes devised for her, but, worn out by a regimen that is as much physical as mental, gives in and follows his orders. Soon after she manages to escape and get back to New York, she becomes a major star. She hasn't forgiven Damon, though, so when the opportunity presents itself she tricks him into visiting her apartment, where she imprisons him in a cage shes had built. Nonetheless, the two soon become lovers, even though evil forcesincluding Damon's plastic-surgeon brotherare determined to thwart their passion. The bad guys are routed, but Damon, whos been experimenting with weightlessness, suddenly evaporates after being released from his cage. A grieving and Oscar-winning Anna has intimations of his possible return. An original and beguiling interpretation of old myths and contemporary preoccupations, despite a plot that often goes into overdrive. -- Copyright ©1999, Kirkus Associates, LP. All rights reserved.