Items related to The Mammoth Book of Eyewitness Ancient Egypt 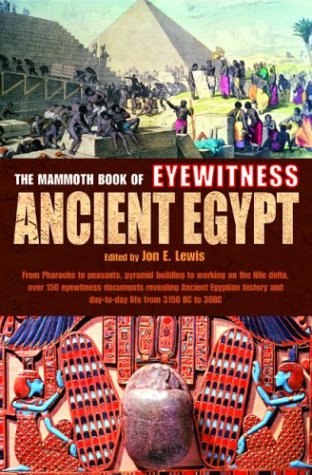 The building of the pyramids at Giza, Cleopatra's momentous meeting with Julius Caesar, the founding of Alexandria, the Battle of Actium stand famously among the scores of critical events that shaped the history of ancient Egypt from 3150 B.C., when the rival kingdoms of the land were first unified, to its conquest by Rome in 30 B.C. In this new Mammoth volume's variety of firsthand accounts—from papyri, chiseled tablets, court records, temple texts, graffiti, classical Greek and Roman histories—the ancient Egyptian way of life is unfolded in colorful detail with dramatic immediacy. Reconstructing the history of the land ruled by thirty-two dynasties of pharaohs, these selections chronicle in vivid, unforgettable particulars the everyday customs and spiritual life of the people. Here are hymns to victory and songs of love; tales of coronation, conspiracy, and rebellion; accounts of floods and famine; reports on hunting wild cattle and mining in Sinai; prescriptions for contraception and spells for the afterlife; dietary habits and dress codes; trials for tomb robbery and pharaonic punishments for stealing from the gods. Over 150 historical documents in addition to more recent explorations illuminate the civilization that flourished along the Nile in the ancient world.