Items related to The Illustrated History of Magic 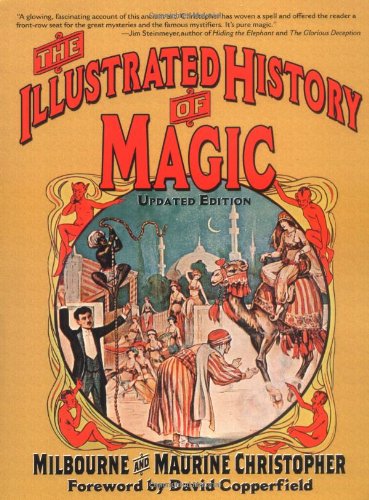 Set off on a magical history tour with Milbourne Christopher's classic Illustrated History of Magic. Follow the fascinating stories of the world's greatest conjurers, from sorcerer-priests in ancient Egypt, The Great Herrmann, Harry Kellar, Chung Ling Soo, Houdini, to modern miracle workers like David Copperfield, Siegfreid and Roy, and David Blaine. Filled with fantastic illustrations—poster art, photographs, illusion diagrams—this book is a feast for anyone interested in the conjuring arts.

Milbourne Christopher played a crucial role in reviving magic's appeal for audiences in America and Europe, practicing his craft on TV and Broadway. An expert and author on magic, extrasensory perception, and the hereafter, Christopher lectured at colleges and universities and was at the forefront of the magic world from the 1950s until his death, at 70, in 1984.

Feared as the devil's handiwork in medieval Europe, officially outlawed in the British colonies of North America, magic performances nevertheless attracted steadily widening audiences who marveled at the sleight of hand or sought proof of the existence of supernatural forces. First published in 1973 and long out of print, this mesmerizing, intelligent history sweeps from the earliest known image of a conjuring feat?an Egyptian wall painting made around 2500 B.C.?to the feats of that renowned escapologist Harry Houdini. In between, the authors introduce us to Muslim traveler Ibn Batuta's 1355 eyewitness account of an Indian rope trick in a Chinese royal court and to the exploits of trailblazers like French virtuoso Jean Eugene Robert-Houdin, British showman Signor Antonio Blitz and Victorian entertainment producer John Nevil Maskelyne. This updated edition also covers contemporaries such as Doug Henning, Siegfried & Roy, David Copperfield and Las Vegas star Melinda Saxe. Among the 300 illustrations (plus eight pages in color) are posters, ads, photos, engravings, cartoons and playbills. Milbourne Christopher, who died in 1984, was a professional magician, lecturer and historian. Maurine Christopher is his widow.
Copyright 1996 Reed Business Information, Inc.