Items related to The Legend of Spud Murphy

The Legend of Spud Murphy 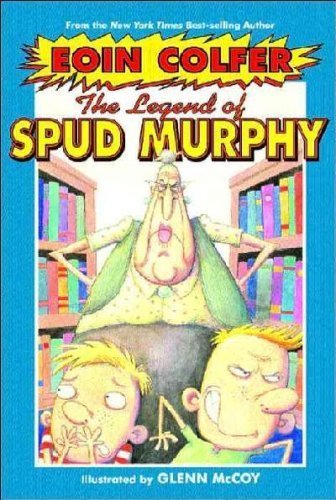 When their mother starts dropping them off at the library several afternoons a week, nine-year-old William and his brother dread boredom and the overbearing librarian, but they are surprised at how things turn out.

Eoin Colfer (pronounced "Owen") (born May 14, 1965) is an Irish author. Eoin Colfer grew up in Wexford, Ireland, along with his four brothers, Paul, Eamon, Donal, and Niall. He first developed a passion for writing in primary school, reading viking books inspired by his history lessons at the time. His father was a primary school teacher, as well as an artist and historian. His mother is a drama teacher. In 1986, Colfer became a Primary School teacher, but continued to write in his free time.

Grade 2-4–This hilarious offering is the first in a new chapter-book series. When their parents become fed up with their boisterous behavior during summer vacation, Will and Marty Woodman are forced to do something educational: "Reading. It's perfect. How can you get into trouble reading a book?" The brothers will spend time at the library, despite their worries about the librarian, Mrs. "Spud" Murphy, who is feared by all children. According to the rumors, she uses a gas-powered gun to shoot potatoes at kids who make too much noise. When Mom drops them off later that afternoon, Mrs. Murphy leads them to the children's section and warns them that they are not to venture off of the carpet. Readers will immediately pick up that Marty has a problem following the rules and trouble ensues when he steps off the rug to cause some mischief. However, he has met his match in Spud, who silently appears on the scene like a "ninja librarian." The cartoon illustrations enhance the funny mood of the story. Youngsters, especially reluctant readers, will laugh out loud at this clever book, which can also be read aloud. A good choice for fans of Dav Pilkey, Jon Scieszka, and Ian Whybrow.–Christine McGinty, Albany Public Library, NY
Copyright © Reed Business Information, a division of Reed Elsevier Inc. All rights reserved.

2. The Legend of Spud Murphy