Items related to A Don't Sweat the Small Stuff Treasury: A SPECIAL... 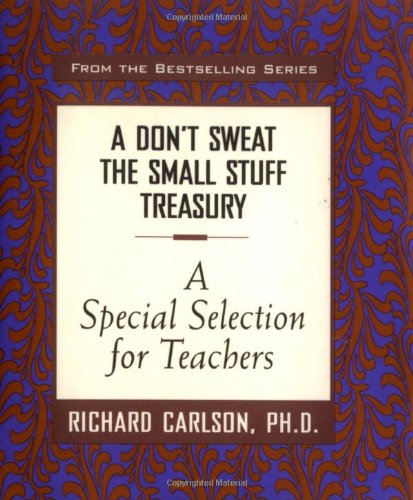 The Don't Sweat the Small Stuff Treasuries Richard Carlson, Ph.D.The Don't Sweat the Small Stuff phenomenon continues with a series of mini books perfect for gift-giving. Each treasury targets a specific audience and contains a wealth of wisdom on making life a little bit easier and more stress-free; specially selected from the books in Richard Carlson's bestselling series.

Best-selling author Richard Carlson, Ph.D., creator of the popular Don't Sweat the Small Stuff series and the just published Don't Get Scrooged, died suddenly of cardiac arrest enroute to New York on December 13. Carlson, 45, published his first book in 1985 and went on to publish more than 20 books that remain popular in English and in translation in 130 languages and 35 countries. Richard Carlson grew up in Piedmont, CA. He received his undergraduate degree from Pepperdine University and his Ph.D. in psychology from Sierra University. He was in private practice as a psychotherapist when he started to publish books about psychological and spiritual health. As his books started to attract a large audience, he began writing full time so he could teach more people how to live with presence and ease by cultivating gratitude and generosity. Dr. Carlson was a large supporter of and participant in the National Center for Family Literacy and at the time of his death he was working on a project with them called for "A Penny a Book" from publishers, authors and literary agents to promote literacy. Dr. Carlson is survived by his wife and life partner of 25 years, Kris Carlson, his co-author on Don't Sweat the Small Stuff in Love and the author of Don't Sweat the Small Stuff for Women, his loving daughters Jasmine and Kenna, sisters, Kathleen Carlson Mowris of Olympic Village, CA and Anna L. Carlson of La Selva Beach, CA, and his parents, Barbara and Don Carlson of Orinda, CA. A private memorial service will be held next week. Donations in lieu of flowers can be made in Richard's honor to local food banks, Challenge Day, Girls Inc. or Children Inc.