Items related to A Paladin in Hell (Advanced Dungeons & Dragons) 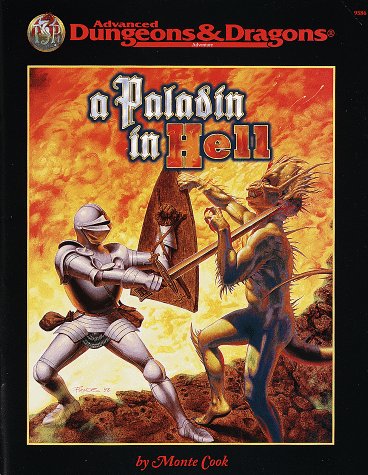 But even the sleep of death, at the end of a long lifetime spent battling evil, did not bring peace to Klysandral. During his funeral, the entire Temple of Neheod was dragged by terrible magic into the Nine Hells, along with the soul of Klysandral and score of living mourners!

What unearthly motive could be behind this tragedy? Only the bravest, strongest, and most resolute heroes will have the mettle to find the answer. Along the way, they will meet the enigmatic wizard Emirikol the Chaotic, sail aboard the fiendish ship Demonwing, and finally face the horrific minions and overwhelming terrors of Hell itself.

Only the path of light can lead the bravest of the brave into perdition and safely out again. Step wisely, and walk in justice.

4. A PALADIN IN HELL (ADVANCED DUNG