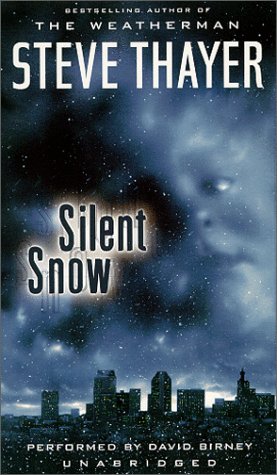 A St. Paul, Minnesota, investigative reporter embarks on a personal quest for justice and revenge when his young son is snatched from his nursery at the height of a blizzard, a crime that may have ties to his own past.

Steve Thayer was born and raised in St. Paul, Minnesota, and continues to make his home in the suburb city of Edina.  Wolf Pass is his sixth novel, and continues the story of Wisconsin-local Deputy Pennington, who, now in secluded retirement, narrates his experiences working for the Kickapoo Falls sheriff's department in the 1960s. His first book, published in 1994, is titled Saint Mudd.  His second book and a national best seller, The Weatherman was published first in Hardcover in 1995 and then paperback in 1996. Silent Snow followed to rave reviews as well. Steve always thoroughly researches his novels.  In once instance, he took a part time job with a local weatherman to learn the ins-and-outs of weather for his upcoming novel.  For Wolf Pass, Steve researched German prisoner-of-war camps located in Wisconsin during WWII.

Rick Beanblossom, an investigative reporter, and his wife, a beautiful television anchor, are themselves catapulted into the news when their one-year-old son is kidnapped and held for ransom in a crime eerily reminiscent of the Lindbergh baby kidnapping. Guidall is at his best narrating this highly suspenseful story. The listener can't help but get caught up in the excitement, which is magnified by the sometimes breathless performance. The voices are utterly convincing and, despite frequent flashbacks to the Lindbergh case, are maintained so well that there's never any doubt who is speaking. The intensity of the drama is enhanced by Guidall's superb reading. S.S.R. Winner of AUDIOFILE Earphones Award. © AudioFile 2000, Portland, Maine-- Copyright © AudioFile, Portland, Maine