Items related to A Firing Offense 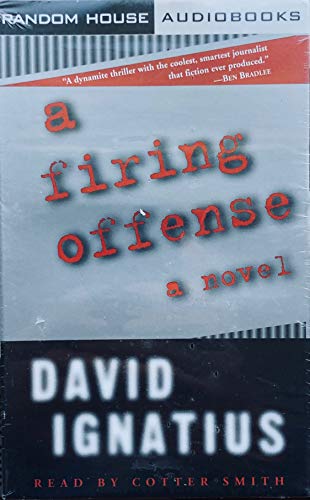 When a member of the newsroom crosses the professional line in a search for the truth, the results turn out to be hazardous to his career-and to his life. In the tradition of John le Carré, critically-acclaimed novelist and award-winning journalist David Ignatius creates this searingly realistic account of espionage in the work place and one man's struggle to do the right thing. Foreign correspondent Eric Truell gains international recognition with his exclusive story after he breaks into a French restaurant held by terrorists. Tempting him with more scoops, a maverick intelligence agent offers sensitive information involving a shady trade network with foreign powers. But as Eric follows up the leads, he is no longer sure of his role. Is he an investigative reporter-or a pawn for the CIA? David Ignatius packs this best-selling thriller with finely-drawn characters, authentic settings, and a plot that tightens around every corner. Narrator Richard Ferrone keeps you glued to your cassette player as Eric hovers on the brink of committing the ultimate breach of newsroom ethics.