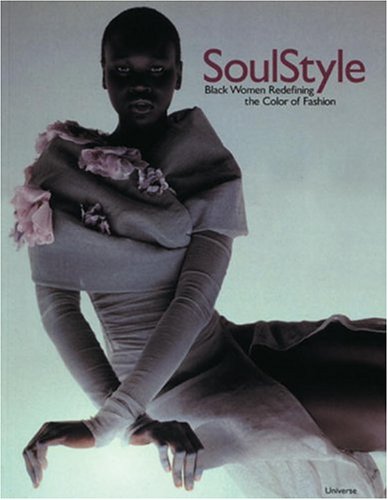 On these pages you'll find more than 101 reasons why "Black is Beautiful". From the sultry stars of film and television to the sexy divas of fashion and music, this book pays tribute to those women who are changing the way America defines fashion and beauty.

Full-color photographs from such top photographers as Steven Meisel, Gilles Bensimon, Paolo Roversi, and George Holz showcase unforgettable Black women at the forefront of style and beauty--woemn who have helped lift the self-esteem of sisters everywhere. SoulStyle features the newly annoitned and the continuously crowned royalty of fashion.

Arranged in categories from Glamour Girls to Hip-Hop chic, Seventies Goddesses to Supermodels, these remarkable photos are accompanied by insightful biographies and commentary from leading arbiters of fashion and style. The book is distinct, sensual, and extraordinary. Each chapter is a candid and provocative look at the influences these women have had on popular culture.

Duane Thomas is a leading New York author and art director. A graduate of the Fashion Institute of Technology, where he studied advertising and communications, he has contributed to Vogue, Elle, Harper's Bazaar, Talk, InStyle, Essence, O:The Oprah Magazine, and Esquire magazines, among others. His first photo book, Body&Soul: The Black Male Book (Universe), was published in 1998.

As longtime fashion editor of the Philadelphia Inquirer, Roy H. Campbell is one of the most respected fashion journalists in the industry. Campbell's syndicated style column has won him an international audience of faithful followers. He has written for Elle, Redbook, Reader's Digest, BET Weekend, and Heart & Soul Magazines, and has appeared on numerous television programs. He resides in his native Wilmington, Delaware, with his four children. This is his first book project.

Dream Hampton is a freelance writer originally from Detroit. She has written about hip-hop music and Black culture for the past ten years. Her articles have appeared in Essence, Vibe, Harper's Bazaar, The Source, and Spin magazines. Her essays have been published in two books, Tupac and The Vibe History of Hip-Hop.

Deborah Gregory is a contributing writer for Essence, the nation's largest magazine aimed at African American women. Since 1989 she has been the magazine's most prolific writer, specializing in entertainment and penning features, cover stories, humor pieces, and profiles. Her writing has appeared in magazines such as Vibe, Spin, Heart & Soul, Paper, Entertainment Weekly, Interview, Life and Seventeen to name a few. Gregory is the author of a new series of youth fiction books, The Cheetah Girls.

Lynda Jones is a New York-based freelance writer and editor. She has contributed articles on entertainment, relationships, fashion, and sports to Details, Essence, Mademoiselle, The Village Voice, Nickelodeon, and many other publications. She is the author of four children's books, including Great Black Heroes: Five Brilliant Scientists, and Kids Around the World Celebrate: The Best Feasts and Festivals from Around the World.

Barbara Summers is the author of three critically-acclaimed books and the editor of the bestselling I Dream a World: Portraits of Black Women Who Changed America. Summers spent seventeen years as a model with the Ford Models, Inc. Throughout the years she has graced the pages of numerous fashion magazines and catalogs. She now devotes herself full-time to her writing career. She resides in New Jersey.

Cheryl Ann Wadlington is a freelance writer living in Philadelphia. her credits includes fashion writer for the Philadelphia Tribune and fashion editor for Word Up! Publications. Her work has appeared in the Cleveland Plain Dealer, Heart & Soul, New Generation (NG), and many other publications. She currently contributes articles on fashion and beauty to BET Weekend, and the Philadelphia Daily News, and writes a syndicated style column for the National Newspaper Publishers Association.

Constance C.R. White is a former fashion director and contributing writer for Talk magazine.White is a former fashion reporter for the New York Times, and the former executive fashion editor of Elle, and held several positions at Women's Wear Daily. She is author of the book StyleNoir: The First How to Guide to Fashion Written With Black Women in Mind and the founder and a member of Fashion Outreach, an organization to promote minority participation in the fashion industry. White resides in New York.