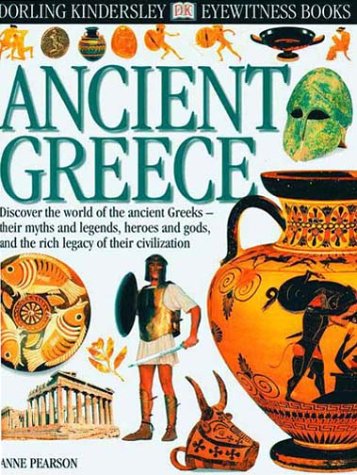 Full-color photos. This look at the culture that most influenced Western society tells how the Greeks made war and worshiped their gods, and examines their legacy of science, medicine, philosophy and art. "While there are other titles that share the focus, age level, and general coverage of this volume, it's hard to beat the attractiveness of the layout and the beauty of the illustrations found here. This book is a worthwhile purchase, even for collections that already include other titles on the topic."--School Library Journal.

Ancient Greek culture, which reached its peak in Athens in the 5th century B.C., produced some of the most glorious and fascinating relics of Western civilization. This terrific Eyewitness Book traces ancient Greek achievements from the Bronze Age through the Hellenistic period using evidence found by archaeologists. Greek myths are introduced by way of statues, carvings, and illustrations. Like all the books of this series, Ancient Greece is incredibly rich in vivid, colorful photographs, which bring the subject to life. Kids and adults can learn about power and politics in Athens, the legendary Herakles (not quite like the Disney version), temples, and home life. Archaeological evidence shows what life was like for women and children of ancient Greece, what people did for fun, and what their standards of beauty and accomplishment were. It's easy to see how influential this ancient culture has been on modern life, from science and medicine to the Olympic games. Extremely informative, intriguing, and entertaining.