Items related to My Palm Pre 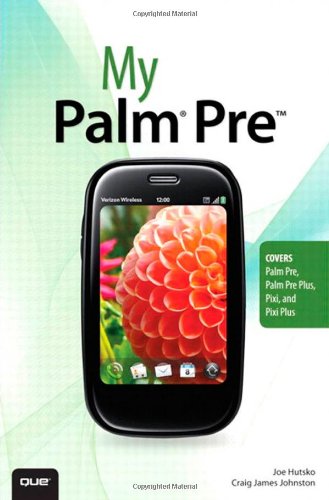 Palm Pre, Palm Pre Plus, Pixi, and Pixi Plus

instructions with callouts to Palm Pre images that show you exactly what to do.

when you run into Palm Pre problems  or limitations.

to help you get the most from your Palm Pre.

Full-color, step-by-step tasks walk you through getting and keeping
your Palm Pre working just the way you want. The tasks include:

·   Moving your information to your new Palm Pre

·   Customizing your Palm Pre to your exact needs

·   Setting up and using speed dialing, voicemail, and conference calls

·   Syncing your Palm Pre with Outlook, Facebook, and MySpace

·   Connecting to the Internet, Bluetooth devices, and your company’s VPN

·   Browsing the Web from your Palm Pre

Craig James Johnston has been involved with technology since his high

school days at Glenwood High in Durban, South Africa, when his school was

given some Apple 2 Euro Pluses. From that moment, technology captivated him,

and he has owned, supported, evangelized, and written about it ever since.

with integrated email and directory services since 1989. Craig has held

many different IT-related positions in his career, ranging from sales support engineer

to mobile engineering a 35,000-smartphone infrastructure at a large bank.

In addition to designing and supporting mobile computing environments, Craig

writes about them for Smartphone Essentials and CrackBerry.com, a leading

BlackBerry blog. Craig also co-hosts the CrackBerry.com podcast and his own

to the speed limits while driving them.

Originally from Durban, South Africa, Craig has lived in the United Kingdom,

the San Francisco Bay Area, and New Jersey, where he now lives with his wife

Karen and a couple of cats.

Dummies, Second Edition. For more than two decades, Joe has written about

computers, gadgets, and video games for numerous publications and websites,

Joe’s first novel, The Deal,was recently rereleased in trade paperback with a

new foreword by the author (tinyurl.com/hutskodeal), and you can find links to

As a kid, Joe built a shortwave radio, played with electronic project kits, and

learned the basics of the BASIC programming language on his first computer,

the Commodore Vic 20. In his teens, he picked strawberries to buy his first

Apple II computer. Four years after that purchase (in 1984), he wound up working

for Apple, where he became the personal technology guru for the company’s

chairman and CEO. Joe left Apple in 1988 to become a writer and worked

on and off for other high-tech companies, including Steve Jobs’ one-time NeXT.

He authored a number of video game strategy guides, including the bestsellers

All comments, suggestions, and feedback are welcome, including positive and