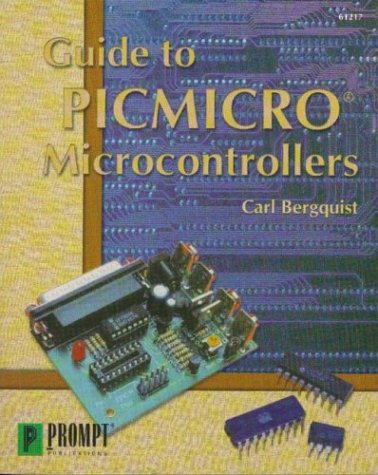 Aimed at both students and seasoned users, this book will take the reader though the peripheral interface controller (PIC) like no other text. PICs have been described as the hobby chip of the '90s due to their ease of use. Hardware and software are also discussed in detail. Topics include: physical appearance, electrical structure, software requirements, hardware requirements, prototype layout boards, simple PIC programmers, PIC instruction set, use of the Microchip tools including MPLAB and Technical Library, software applications, software codes, and 8-10 PIC projects.

In the years since Intel introduced its first microprocessor, thousands of microprocessors and microcontrollers have hit the market. The most miraculous of those is Microchip's PICMICRO(r) MCU. This "hobby chip of the '90s" quickly became popular with technicians, experimenters, and hobbyists, and enthusiasm soon hit a fever pitch. Thus, a whole new chapter in the history of microprocessing was written! Microchip's PICMICRO(r) line is nothing short of miraculous in its performance and ease of use. Since the initial PIC16C54, the company has produced and released an extensive list of devices to suit virtually any need. That, combined with the very simple 35-command instruction set, makes these integrated circuits perfect for many applications. Additionally, their low cost has made PICMICRO(r) MCUs attractive to the commercial electronics industry and others. Today, we see what seems like everything from hair dryers to toys to kitchen appliances being controlled by computer chips of one sort or another. In Guide to PICMICRO(r) Microcontrollers, Carl Bergquist explains this technology in a way not rivaled by any other author in this one-of-a-kind text that belongs on the bookshelf of every electronics buff. Don't be caught without it! Carl Bergquist followed a successful career as a photojournalist for AP, UPI, The New York Times, Newsweek, and other publications by turning his efforts toward a lifelong hobby of electronics.