Items related to Religious and Philosophical Aspects of the Laozi (SUNY... 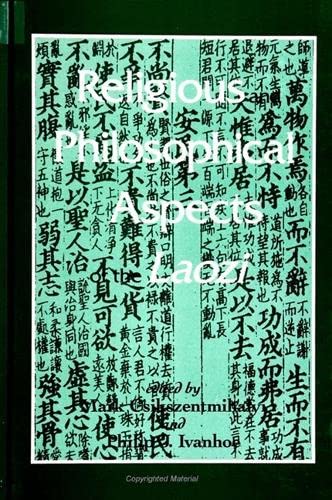 Leading scholars examine religious and philosophical dimensions of the Chinese classic known as the Daodejing or Laozi.

Renowned international scholars examine crucial issues surrounding the Laozi, the third century B.C.E. Chinese classic also known as the Daodejing in this indispensable volume. The work offers diverse interpretations, a wide range of scholarly traditions, and a variety of ways to engage, ponder, and evaluate the Laozi.

Mark Csikszentmihalyi is Assistant Professor of Religion at Davidson College and a former Fellow at the National Humanities Center. He also serves as editor of the American Academy of Religion’s Texts and Translations book series. Philip J. Ivanhoe is an Associate Professor in the Departments of Philosophy and Asian Languages and Cultures at the University of Michigan, Ann Arbor. He is the author of several books, including Ethics in the Confucian Tradition: The Thought of Mencius and Wang Yang-Ming and Confucian Moral Self Cultivation. Most recently he has coedited, with Paul Kjellberg, Essays on Skepticism, Relativism, and Ethics in the Zhuangzi, published by SUNY Press.

“If I could put one book about the Laozi in the hands of someone who genuinely wants to experience the brilliance, profundity, and complexity of the work based on the best modern scholarship, I would recommend this book. The essays can be read by a general audience and yet they offer the very best contemporary scholarship on one of the most important classics in the world today.” ― John Berthrong, author of All Under Heaven: Transforming Paradigms in Confucian-Christian Dialogue

“This is a collection of new and insightful essays by a group of impressive scholars on one of the most important, difficult, and influential books from early China. The religious and philosophical issues dealt with are not only important to the Laozi but also central to the field of early Chinese religion and philosophy, especially that of Daoism. It will be useful to both students of Chinese literature, philosophy, and religion, and people who are interested in philosophy and mysticism.” ― Shuen-fu Lin, University of Michigan

1. Religious and Philosophical Aspects of the Laozi -