Items related to Action and Contemplation: Studies in the Moral and...

Action and Contemplation: Studies in the Moral and Political Thought of Aristotle (SUNY series in Ancient Greek Philosophy)

Action and Contemplation: Studies in the Moral and Political Thought of Aristotle (SUNY series in Ancient Greek Philosophy) 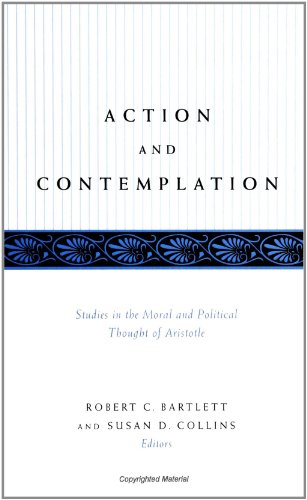 European and North American scholars explore the political philosophy of Aristotle, with particular attention to questions arising from the Politics and the Nicomachean Ethics.

This wide-ranging collection of essays by European and American scholars presents some of the most interesting and important work now being done on the political philosophy of Aristotle. Part One investigates what is arguably the most urgent and controversial question of concern to students of Aristotle today, namely, the possibility of grounding moral and political action in some version of Aristotelian rationalism. Part Two considers a series of specific questions arising from the Politics and the Nicomachean Ethics, among which are Aristotle’s understanding of moral virtue; the problem of evil; justice and the very idea of “common good”; friendship; the status of the philosophic life vis-à-vis the political; and the outlines of the best possible political community.

Robert C. Bartlett is Assistant Professor of Political Science at Emory University. He is the editor of Xenophon’s The Shorter Socratic Writings: “Apology of Socrates to the Jury,” “Oeconomicus,” and “Symposium.”

Susan D. Collins is Assistant Professor of Political Science at Southern Illinois University at Carbondale and Fellow at Liberty Fund in Indianapolis.

“This book is distinguished from other books sensitive to the connection between Aristotle’s Ethics and his Politics in two regards. First, it is a collection of essays by scholars representative of different schools of thought and not a sustained argument by an individual. More important, it bridges the gap between Aristotle’s closely linked works. It proposes neither a politically informed reading of the Ethics nor an ethically informed reading of the Politics; it brings the two together in an exceedingly fruitful way, treating them as a single, extended argument.” ― Paul A. Rahe, University of Tulsa

“This book not only contains a set of first-rate essays on Aristotle, but it also supplies the context in which readers can be convinced that Aristotle, after several centuries, is once again relevant and useful. If I were looking for one book that would make clear why Aristotle has come back into favor, and what might be done with his thought, this would be it.” ― Harvey C. Mansfield, Harvard University

1. Action and Contemplation - Studies in the Moral and Political Thought of Aristotle