Items related to Soundings on Cinema: Speaking to Film and Film Artists... 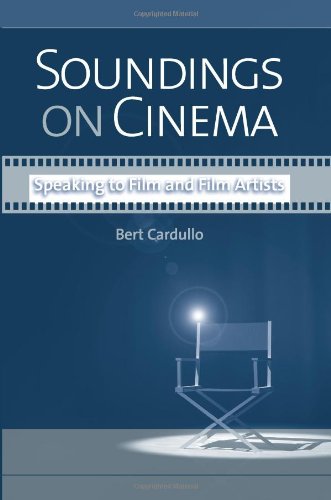 In 'Soundings on Cimena', film critic Bert Cardullo engages nine major international film directors - Antonioni, Bergman, Bresson, De Sica, Felini, Kaurismaki, Leigh, Renoir and Syberberg - in a series of dialogues about how they work and the meanings of their films.

In Soundings on Cinema, film critic Bert Cardullo engages nine major international film directors--Michelangelo Antonioni, Ingmar Bergman, Robert Bresson, Vittorio De Sica, Federico Fellini, Aki Kaurismäki, Mike Leigh, Jean Renoir, and Hans-Jürgen Syberberg--in a series of dialogues about how they work, the meanings of their movies, and the relationship of their pictures to other directors' films and to the other arts. Each of these probing and thought-provoking interviews is accompanied by an overview of the director's career, an essay on a particular film, or a series of interconnected reviews of the director's films. Focusing on practical matters related to filmmaking--acting, design, cinematography, directing, writing, and editing--as well as historical, aesthetic, and critical-theoretical issues raised by the films themselves, Cardullo explains how, at their best, these filmmakers use the resources of their medium to pursue complex, significant humanistic goals.


"This is a lively and varied collection focusing on filmmakers who have played truly important roles in the evolution of modern cinema. The interviews are intelligent and to the point, and Cardullo is more willing than most interviewers to challenge the filmmakers he's talking with, expressing divergent views on issues he regards as particularly significant. While published interviews are not a mainstay of cinema scholarship, those included here provide invaluable information, as well as a humanizing perspective on these film artists." -- David Sterritt, Long Island University

Bert Cardullo is Professor of Media and Communication at the Izmir University of Economics in Turkey. He is the author, editor, or translator of a number of books on film and drama.