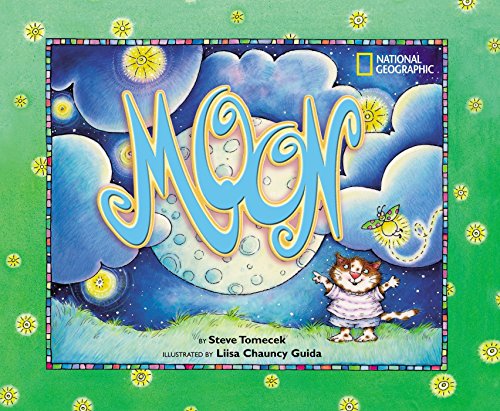 A cartoon cat and bug explain scientific history and concepts regarding the Earth's moon: its ever-changing appearance, composition, comparisons to Earth and the sun, Galileo's observations and discoveries in 1609, astronauts, orbits, and other topics. Busy, colorful borders are full of decorative details based on the main pictures. A concluding craft project gives instructions on how to make craters.

Steve Tomecek is the Executive Director and founder of Science Plus, Inc. He is the author of numerous Jump Into Science® books as well as several other titles, including the winner of the 1996 American Institute of Physics Excellence in Science Writing Award. He lives in Bellerose, New York.

K-Gr. 3. A new entry in the Jump into Science series once again uses an engaging picture-book format to introduce basic facts about a topic, here "our closest neighbor in space." Short, uncomplicated sentences discuss the moon's relative size, its surface, Galileo's observations, and crater formation. In such a simplified format, it is hard to convey some concepts fully. Despite the full-spread illustration of the moon rotating around Earth, for example, children may need help understanding the discussion of how, exactly, light changes the appearance of the moon's shape. But Guida's artwork, in bright, saturated colors, will easily draw children into the science; each spread features a polka-dot-winged firefly and a grinning calico cat resembling a young child in rumpled shorts and a T-shirt. Tomecek's words encourage a sense of awe and wonder not only about the moon, where the footprints of the first lunar astronauts are still visible, but also about Earth, which, from the moon, appears to be "a special place . . . full of light and color . . and unlike anything else in the sky." Gillian Engberg
Copyright © American Library Association. All rights reserved