Items related to Mysteries in Our National Parks: Buried Alive (#12) 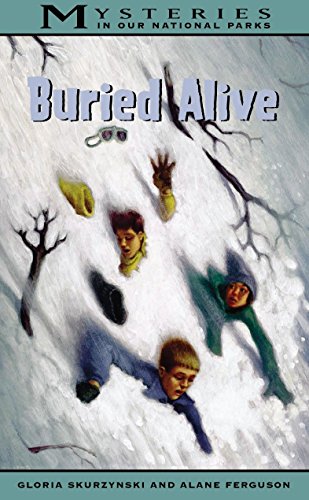 The Landons are in Alaska's Denali National Park and are joined by 13-year-old Nicky Milano. Jack, Ashley, and Nicky accept a dogsled ride from a man in a Park Service uniform. Deep in the frozen wilderness, the kids are stranded and are caught in an avalanche. Includes a park map.

Alane Ferguson is an award-winning writer. Her first mystery, Show Me the Evidence, won the Edgar Award, given by the Mystery Writers of America. She lives in Elizabeth, CO. Visit Alane Ferguson at: www.alaneferguson.com. Award-winning author Gloria Skurzynski has written more than 30 children’s books. Her nonfiction book, Almost the Real Thing, won the American Institute of Physics Science Writing Award. She has written several nonfiction books for National Geographic including Are We Alone, an NSTA Outstanding Science Trade Book for Young People and an IRA/CBC Young Adults’ Choice for 2006. She lives in Boise, ID. Visit Gloria Skurzynski at her Web site: www.gloriabooks.com.

Grade 4-7-In this 12th book in the series, Jack and Ashley Landon are once again in a life-or-death situation. Thirteen-year-old Nicky Milano has joined the Landons on their trip to Denali National Park in Alaska. What the siblings don't know is that he is in the Witness Protection Program and has a "hit" out on him, to prevent him from telling secrets he learned from his mobster father. Together the three young people must deal with an assassin on a dogsled, an avalanche, and carbon-monoxide poisoning. A must-have for fans of the series (originally called the "National Parks Mystery" series), the book also stands alone as a suspenseful survival story.
Yapha Nussbaum Mason, Brentwood Lower School, Los Angeles
Copyright © Reed Business Information, a division of Reed Elsevier Inc. All rights reserved.

Book Description National Geographic Society, United States, 2003. Hardback. Condition: New. Language: English. Brand new Book. This latest thriller takes the Landons to Alaska, where wildlife biologist Olivia and her photographer husband, Steven, have been asked to study the impact of snowmobiles on the wolverine population of Denali National Park. With the family is 13-year-old Nicky Milano. When a man in a Park Service uniform offers to take Jack, Ashley, and Nicky on a dogsled ride, the kids eagerly accept. They mush off across the snow, riding deeper and deeper into the frozen wilderness. But during a rest stop, the man suddenly rushes off, leaving the young people stranded. As they huddle to keep warm and try to figure out what to do, they hear a deafening roar. Avalanche! Now the kids must fight for their lives. Can they somehow escape the thundering mass of snow? Or will they be buried alive?. Seller Inventory # BTE9780792269663

7. MYSTERIES IN OUR NATIONAL PARKS: