Items related to Fortress Introduction to the Lutheran Confessions

Fortress Introduction to the Lutheran Confessions 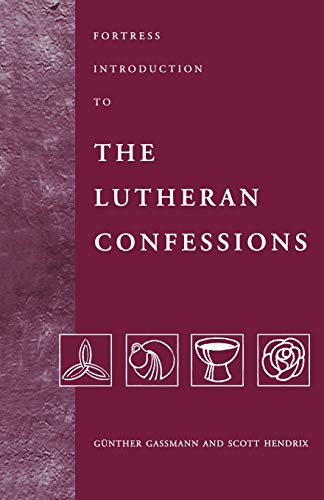 Despite their near-scriptural status, the Lutheran Confessions are not widely used in Lutheran circles because of their presentation has been too heavy and forbidding. Geared specifically for today's classroom and parish use, this accessible introductory text incorporates the latest historical research and includes sections on contemporary Lutheranism and discussion questions.

Hendrix and Gassmann present the historical context for the reformation in its beginning and development as a background to the emergence and gathering of the Confessions. Core chapters then explore (1) the structure of faith (scripture as norm, law-gospel framework, the Trinity, and justification), (2) Christian community (the sacraments, ministry, nature of the church), and (3) the Christian life (the two reigns, sin, sanctification, eternal life). A final chapter explores the role Confessions play in Lutheran identity in today's pluralistic, ecumenical environment.

Gnther Gassmann is the former Director of the Commission on Faith and Order at the World Council of Churches, Geneva, Switzerland, and Distinguished Visiting Professor at Gettysburg Lutheran Seminary.

The idea for this book came from our experience of introducing the Lutheran Confessions to people who previously had little exposure to them. These audiences include students at Lutheran seminaries who were studying the confessions for the first time and Christians from many traditions who were discovering the documents in ecumenical conversations. The Lutheran tradition has produced many worthy treatments of the Book of Concord (1560) and of the individual confessional writings that it contains. These treatments include insightful theological analyses of the documents and detailed studies of the historical context. Over the years we have greatly benefited from these studies and we continue to sue them in our work, including the preparation of this book.

As we taught the confessions in recent years, however, we felt that a basic introduction should be available in addition to these more extensive works. This book is our attempt to provide that kind of introduction. It is for students in college and seminary who are taking courses on Lutheranism, but it is also for people in the churches who want to sharpen their knowledge of the Lutheran tradition.

The focus of our study is the Book of Concord itself, where it came from, what it contains, and how it has defined Lutheran identity. It treats the Book of Concord as both a historical landmark and a theological foundation despite the fact that it is subject to the conditions of its century, one of which was a strident polemical atmosphere that we no longer share. Chapters one and two place the confessions in their historical framework by providing introductions to the Reformation in general and to the rise of Lutheranism in particular. Chapter three discusses the concept and the importance of confessions and introduces each document in the Book of Concord. The next three chapters deal with the theology of the confessions: chapter four explains the pillars on which the structure of that theology is built; chapter five treats the sacraments, the ministry, and the nature of the church; chapter six, on the Christian life, embraces the issues of sin, the human will, election, the two reigns of God, good works, and eternal life. Finally, chapter seven calls attention to the significance of the confessions for Lutheran identity, for the expansion of Lutheranism to every continent, for the foundation and work of the Lutheran World Federation, and for the emergence and ecumenical commitment of a worldwide communion of Lutheran churches.

The writing of this book has itself been a dialogue between the authors. One is American and one is German. One is a church historian who has taught at several seminaries and has written mostly about the Reformation. The other is a systematic theologian who has held several ecumenical positions and has written widely on Lutheranism and on ecumenical topics. We do not have exactly the same position on all the themes of this book and we have made no attempt to harmonize our theologies. The chapters are not a conglomeration of our ideas: Hendrix is the author of chapters one, two, six, and the first two sections of chapter four; Gassmann is the author of chapters three, five, seven, and the last two sections of chapter four. Nevertheless, we have read and discussed all the material together and we have learned from each other in the process. As a result, we have made some changes in what we have written along the way and we have been forced to restate our ideas with more precision. We hope that our book can illustrate the way in which Lutherans from different backgrounds and disciplines can live in dialogue with one another within the framework of a common confessional identity.

To make this book useful as an introduction and as a reference, we have included a glossary of important theological and historical terms that appear in the text with an asterisk. At the end of each chapter we have suggested questions that might guide discussion of the material and further reflection on it. Endnotes have been left to the discretion of each author, but together we have supplied a bibliography that indicates the length and breadth of research on the confessions to which our study is also indebted. Although we have consulted and occasionally invoked the critical edition of the confessions published in Germany, we have regularly cited and quoted texts in English from the Tappert edition of the Book of Concord that was published in 1959. In these quotations we have amended the text insofar as it was necessary to employ more inclusive language. Our references to the Book of Concord cite the same paragraph numbers that are used in both the critical and the Tappert editions; references to the Formula of Concord (FC) are to the Solid Declaraion unless otherwise noted. . . . ---from the Preface

1. Fortress Introduction to the Lutheran Confessions

3. Fortress Introduction to the Lutheran Confessions

4. Fortress Introduction to the Lutheran Confessions

5. Fortress Introduction to the Lutheran Confessions

6. Fortress Introduction to the Lutheran Confessions

7. Fortress Introduction to the Lutheran Confessions

8. Fortress Introduction to the Lutheran Confessions