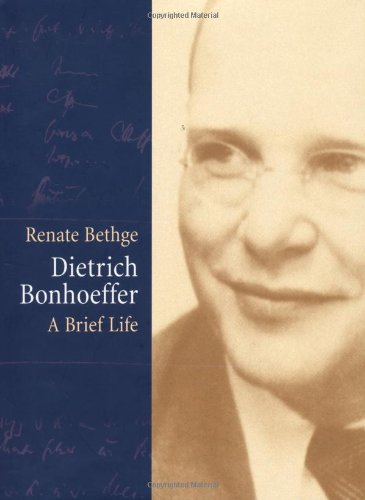 His life became a symbol of Christian resistance to Hitler. His thought ushered in a new era of worldly Christianity. His personal struggle for authentic moral and religious stance became a beacon for a distracted world. Accompanied by family photos, the dramatic life, evolving thought, and perilous times of Dietrich Bonhoeffer (1906-1945) are sketched in this short volume, which also features short excerpts from his writing. This slim volume captures in a compelling and personal way the religious and political odyssey of one of the last century's great religious beacons.

From the Inside Flap:
A life found and lost

"All over the world people who are trying to find meaning and joy in life, despite the disorder of the world, are listening attentively to what (Bonhoeffer) says, because he was granted the great opportunity of confirming his message through his life and death."
—W. A. Visser t'Hooft

"The prophets still walk among us...The way of Dietrich, which led him from the university into the Confessing Church and then into the Resistance, was undoubtedly a prophetic way."
—Gaetano Latmiral

Nearly sixty years after his death in a concentration camp, the life, thought, and witness of Dietrich Bonhoeffer (1906-1945) continue to attract and engage Christians around the world. In this helpful picture of Bonhoeffer's life, his niece Renate Bethge sketches the familial roots and development of Bonhoeffer's convictions, his tireless work in the Nazi period for a church of resistance, and his fateful involvement in a plot to stop the Nazi regime.

"Dietrich Bonhoeffer is the one German theologian who will lead us into the third millnnium."
—Dorothee Soelle

About the Author:
Renate Bethge, an author and editor, is a niece of Dietrich Bonhoeffer and widow of Bonhoeffer’s close friend Eberhard Bethge, who initiated the widespread publication of Bonhoeffer’s writings after his death and authored the definitive biography.

— K. C. Hanson (translator) has taught biblical studies at Episcopal Theological School and the School of Theology at Claremont, Creighton University, and St. Olaf College. He is author of numerous scholarly articles and two volumes in the Proclamation series. K. C. Hanson is the biblical studies editor at Fortress Press. His published works include Palestine in the Time of Jesus: Social Structures and Social Conflicts (Fortress Press, 1998).