Stott, John Through the Bible, Through the Year: Daily Reflections from Genesis to Revelation

Through the Bible, Through the Year: Daily Reflections from Genesis to Revelation 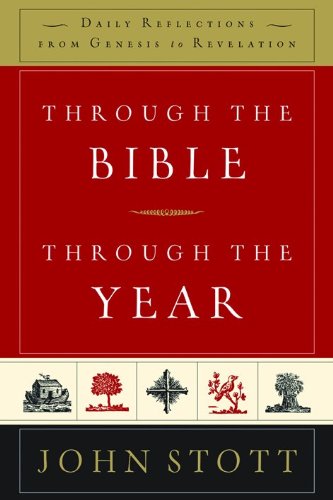 Through the ages, the church year has been ordered according to God's story found in the Bible. With every new season, believers have immersed themselves in the Scriptures, growing closer to God through his Word. In Through the Bible, Through the Year, beloved pastor John Stott takes readers through the whole biblical story, one day at a time. Each of the 365 devotions is based on a key Scripture passage and includes biblical passages for further reading.From September until Christmas, readers experience the Old Testament story from the creation until the coming of Christ. From January through April, they explore the story of Jesus in the Gospels. And from May through August they relive the story of Acts through Revelation, including God's power for living now and his pledge of our final inheritance when Christ returns. With each reading, readers will grow closer to God and grow in their understanding of his Word.

"I can't think of anyone who has been more effective in introducing so many people to a biblical worldview. He represents a touchstone of authentic biblical scholarship that, in my opinion, has scarcely been paralleled since the days of the 16th century European Reformers."-Billy Graham in Time magazine John Stott is without question one of the most beloved and significant pastors and authors of the last fifty years. Named by Time magazine in 2005 as one of the world's 100 most influential people and as one of the 25 most influential evangelicals in America, Stott commands a huge following that defies his quiet demeanor. Now, in Through the Bible, Through the Year, Stott offers original, never-before-published reflections on the Bible from Genesis to Revelation. These daily readings take you through the Scriptures with an emphasis on both the "big picture" of the story of God and the nature of God as Trinity. Christians seeking a stronger, holistic grasp on the Bible will treasure this work that overflows with wisdom gleaned from a life of study and reflection by an internationally beloved pastor and scholar. John Stott is an internationally acclaimed preacher and scholar. He is the author of many works, including Basic Christianity and What Christ Thinks of the Church. He lives in London, England.

John Stott (1921-2011) was an internationally acclaimed London-based preacher and scholar. His many works include Basic Christianity and What Christ Thinks of the Church.

5. Through the Bible, Through the Year: Daily Reflections from Genesis to Revelation Stott, John