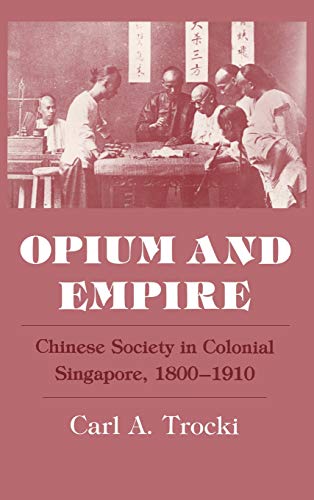 Trocki maintains that the British empire east of the Suez was first and foremost a drug cartel and that British influence was spread by the opium trade. A parallel focus is the economic role of the group of institutions in Singapore known as kongsi, or secret societies; he argues that the social functions of these societies were subverted and criminalized by British opium merchants. This book will be of direct interest to historians of colonial Asia and political scientists concentrating on colonialism and empire. It should also attract a broader audience among those concerned with the powerful influence of drug trafficking on all levels of society.

Book Description Cornell University Press. Hardcover. Condition: Good. A copy that has been read, but remains in clean condition. All pages are intact, and the cover is intact. The spine may show signs of wear. Pages can include limited notes and highlighting, and the copy can include previous owner inscriptions. An ex-library book and may have standard library stamps and/or stickers. At ThriftBooks, our motto is: Read More, Spend Less. Seller Inventory # G0801423902I3N10

Book Description Cornell University Press, 1990. Hardcover. Condition: Good. Item may show signs of shelf wear. Pages may include limited notes and highlighting. May include supplemental or companion materials if applicable. Access codes may or may not work. Connecting readers since 1972. Customer service is our top priority. Seller Inventory # mon0001908224