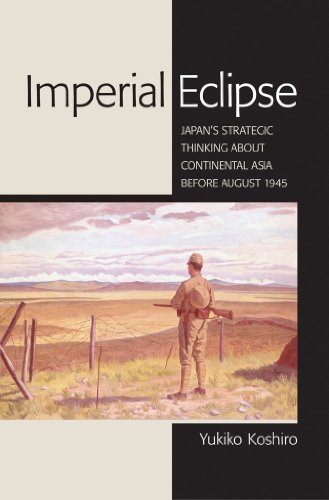 The "Pacific War" narrative of Japan’s defeat that was established after 1945 started with the attack on Pearl Harbor, detailed the U.S. island-hopping campaigns across the Western Pacific, and culminated in the atomic bombings of Hiroshima and Nagasaki, Japan’s capitulation, and its recasting as the western shore of an American ocean. But in the decades leading up to World War II and over the course of the conflict, Japan’s leaders and citizens were as deeply concerned about continental Asia―and the Soviet Union, in particular―as they were about the Pacific theater and the United States. In Imperial Eclipse, Yukiko Koshiro reassesses the role that Eurasia played in Japan’s diplomatic and military thinking from the turn of the twentieth century to the end of the war.

Through unprecedented archival research, Koshiro has located documents and reports expunged from the files of the Japanese Cabinet, ministries of Foreign Affairs and War, and Imperial Headquarters, allowing her to reconstruct Japan’s official thinking about its plans for continental Asia. She brings to light new information on the assumptions and resulting plans that Japan’s leaders made as military defeat became increasingly certain and the Soviet Union slowly moved to declare war on Japan (which it finally did on August 8, two days after Hiroshima). She also describes Japanese attitudes toward Russia in the prewar years, highlighting the attractions of communism and the treatment of Russians in the Japanese empire; and she traces imperial attitudes toward Korea and China throughout this period. Koshiro’s book offers a balanced and comprehensive account of imperial Japan’s global ambitions.

Yukiko Koshiro is Professor in the College of International Relations at Nihon University, Japan. She is the author of Trans-Pacific Racisms and the U.S. Occupation of Japan, winner of the Masayoshi Ohira Memorial Prize.

"In Imperial Eclipse, Yukiko Koshiro presents fresh evidence concerning Japanese relations with Russia and the Soviet Union from the nineteenth century to the end of World War II. The focus is on the war years, but there is a good deal of valuable material on the earlier decades. Koshiro shows that Russians were as much a presence in Japanese life as were Americans and other Europeans."

(Akira Iriye, Charles Warren Research Professor of American HistoryHarvard University, author of The Origins of the Second World War in Asia and the Pacific)

"Imperial Eclipse is a decisive recasting of the way we, in the West, tend to grasp Japan's geopolitical imaginary during World War II and its final stages. A salutary corrective to the typically U.S.-centered notion of a singular 'Pacific war' and the controversies of its atomic coda, Yukiko Koshiro's account establishes in no uncertain terms the Eurasian and colonial frame that was fundamentally at work. We will need to rethink."

"Good history is not a time line carved in stone. Japan did not inevitably become a willing American ally the day the Pacific War ended. This important book brings to light the postwar visions of Japan's wartime leaders. It is a 'revisionist' work in the best sense of that term."