Items related to Whose Detroit?: Politics, Labor, and Race in a Modern...

Whose Detroit?: Politics, Labor, and Race in a Modern American City 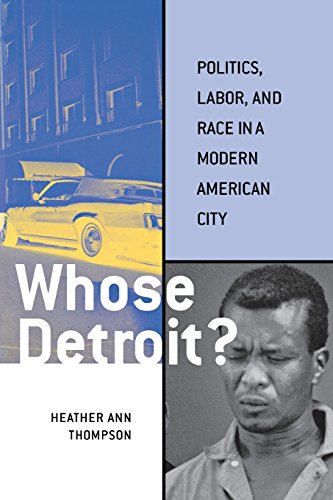 America's urbanites have engaged in many tumultuous struggles for civil and worker rights since the Second World War. Heather Ann Thompson focuses in detail on the struggles of Motor City residents during the 1960s and early 1970s and finds that conflict continued to plague the inner city and its workplaces even after Great Society liberals committed themselves to improving conditions.

Using the contested urban center of Detroit as a model, Thompson assesses the role of such upheaval in shaping the future of America's cities. She argues that the glaring persistence of injustice and inequality led directly to explosions of unrest in this period. Thompson finds that unrest as dramatic as that witnessed during Detroit's infamous riot of 1967 by no means doomed the inner city, nor in any way sealed its fate. The politics of liberalism continued to serve as a catalyst for both polarization and radical new possibilities and Detroit remained a contested, and thus politically vibrant, urban center.

Thompson's account of the post-World War II fate of Detroit casts new light on contemporary urban issues, including white flight, police brutality, civic and shop floor rebellion, labor decline, and the dramatic reshaping of the American political order. Throughout, the author tells the stories of real events and individuals, including James Johnson, Jr., who, after years of suffering racial discrimination in Detroit's auto industry, went on trial in 1971 for the shooting deaths of two foremen and another worker at a Chrysler plant.

Whose Detroit? brings the labor movement into the context of the literature of Sixties radicalism and integrates the history of the 1960s into the broader political history of the postwar period. Urban, labor, political, and African-American history are blended into Thompson's comprehensive portrayal of Detroit's reaction to pressures felt throughout the nation. With deft attention to the historical background and preoccupations of Detroit's residents, Thompson has written a biography of an entire city at a time of crisis.

"A valuable addition to literature on race, labor, and urban life in postwar America. Whose Detroit ? identifies the crucial link between shop floor and labor union issues, on the one hand, and broader urban political developments on the other."--Robert H. Zieger, University of Florida

"Heather Thompson uncovers as few others have the rich variety of black community and workplace organizations in Detroit in the 1960s and 1970s. Her effort to show the different responses of city leaders and union leaders to racial issues challenges the tendency either to merge these two groups or to overlook the distinctions between them."--Nancy Gabin, Purdue University

"Heather Thompson powerfully rewrites the narrative of the collapse of late-sixties liberalism and of the liberal/labor alliance. The 1967 riots were a turning point in the history of the Detroit Left, perhaps the most important radical community in the country during this period. Rather than accept the riots as a product of rising black militancy, impatience, and scapegoating of 'whitey,' Thompson argues that they played a key role in the ascendance of the Black Power movement."--Robin D. G. Kelley, New York University

Heather Ann Thompson is Professor of History at the University of Michigan. She is the Pulitzer- and Bancroft-winning author of Blood in the Water: The Attica Uprising of 1971 and Its Legacy. Her writing has appeared in The New York Times, Time, The Atlantic, Salon, Dissent, New Labor Forum, and The Huffington Post.

1. Whose Detroit?: Politics, Labor, and Race in a Modern American City

2. Whose Detroit?: Politics, Labor, and Race in a Modern American City