Items related to Walker's Mammals of the World

Walker's Mammals of the World 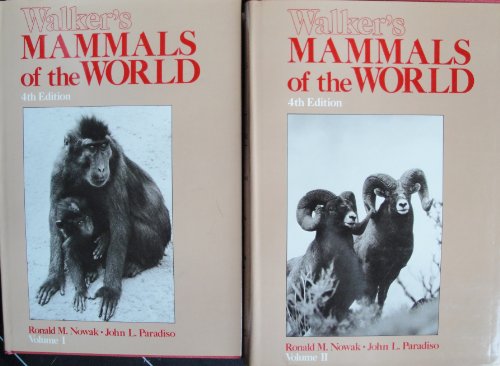 Pp. xliv, 1-568, xlvii-lxi (index); viii, 569-1362, xi-xxv (index); 1500+ black-and-white photos and halftones. Publisher's original red cloth, lettered in gilt on the spine, original pictorial dust jackets lettered in red and black, lg 8vo. This is the fourth edition of this classic guide to the mammals of the world. No ownership marks and no signs of use. This is a very heavy set - if sent overseas it will require extra postage.

Ernest P. Walker (1891-1969) began work on Mammals of the World in the early 1930s, when he became assistant director of the National Zoo in Washington. His work reflected an unequaled store of knowledge about the world's mammals. Ronald M. Nowak was senior author of the fourth edition of Walker's Mammals of the World, published in 1983. His otherworks on mammalogy include North American Quaternary Canis (1979) and several parts of the National Geographic Society's Wild Animals of North America (1979, 1987), for which he also was editorial consultant. He received a Ph.D. in biology from the University of Kansas in 1973 and was staff mammalogist at the former Office of Endangered Species, U.S. Fish and Wildlife Service, from 1974 to 1987. He served as an Air Force officer for four years and is a private pilot.

WALKER'S MAMMALS OF THE WORLD