Items related to Raising the Tone of Philosophy: Late Essays by Immanuel... 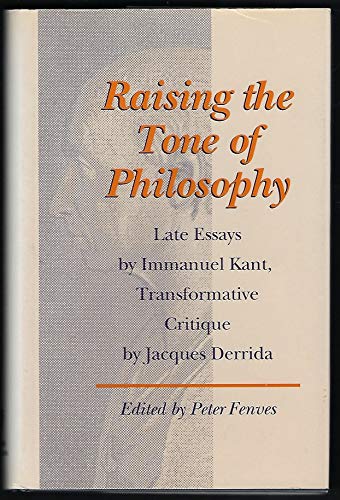 In Raising the Tone of Philosophy, Peter Fenves expands the context of Jacques Derrida's work on voice and tonality by presenting the first English translations of two of Kant's important late essays, "On a Newly Arisen Superior Tone in Philosophy" and "Announcement of a Near Conclusion of a Treaty for Eternal Peace in Philosophy." The book also includes a revised translation, by John Leavey, of Derrida's "On a Newly Arisen Apocalyptic Tone in Philosophy," which rewrites and reorients Kant's essays. After showing how Kant and Derrida concur on at least one point -- the voice of reason guards a secret -- Fenves proposes that these essays reveal the ineluctable tonality of all philosophical texts, especially those that wish to announce an end to philosophy.

"Not only an indispensable text for readers of Kant and Derrida; it also encourages our hopes for that degree of clarity and light which we mere mortals may fleetingly enjoy." -- Michigan Quarterly Review

"Fenves has done an admirable job of tracing the occasion of Kant's polemics on tone." -- Journal of Aesthetics and Art Criticism

"This handy volume makes available [Derrida's] 'deconstructive' analysis of the Kantian critical tradition which has been heretofore unavailable to the English reading public." -- Reader's Review

"The chances of finding Derrida together with a philosopher like Kant are slim. In Peter Fenves's impeccably edited Raising the Tone of Philosophy, such an improbability is not only realized but is precisely what is at stake." -- TLS

Peter Fenves is professor of German at Northwestern University. He is the author of A Peculiar Fate: Metaphysics and World History in Kant and "Chatter": Language and History in Kierkegaard

Book Description The Johns Hopkins University Press, 1992. Condition: Good. A+ Customer service! Satisfaction Guaranteed! Book is in Used-Good condition. Pages and cover are clean and intact. Used items may not include supplementary materials such as CDs or access codes. May show signs of minor shelf wear and contain limited notes and highlighting. Seller Inventory # 0801844568-2-4