Items related to The Institution of Theory

The Institution of Theory 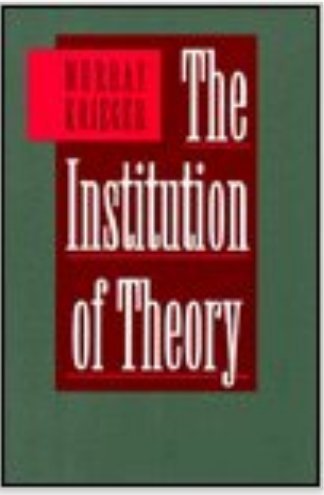 During at least the past decade, violent controversy in what has become known as the "human sciences" has been generated, as perhaps never before, by the increasingly aggressive role played by theory. Murray Krieger was one of those largely instrumental in moving theory into that role. In The Institution of Theory, he examines, at once sympathetically and critically, the process by which theory has become institutionalized in the American academy and the consequences of theory as an academic institution. He traces the transformation of literary theory into critical theory and relates it to changes in the place of literature within questions about discourse at large. And he faces the costs as well as the gains of the recent denial of privilege to the literary.

What, he asks, is the future of the languages of the humanities now that criticism, no longer just one of several literary activities, makes its all-encompassing claims as an imperializing institution?

To support his view of the issues at stake in current theoreticaldebate, Krieger surveys both the history of American criticism and the general history of theory in the West. He sees divisions in each of them that foreshadow the current debates: in the first a conflict between the social and the aesthetic functions of literature, and in the second a conflict between the treatment of literature as a reflection of a culture's ideology and the treatment of literature as a subversion of that ideology. To what extent, he asks, are our debates new and to what extent are they merely refashioned versions of those we have always had with us?

Recent years have seen an ugly polarization of almost all discourse concerning the humanities, as even moderate statements have been charged with being representative of one extreme or the other. Despite this risk, Krieger has added his own moderate voice, in hopes of attracting a balanced response that would encourage the expansion of the range of texts for study, together with an expansion into the political of our ways of studying them, while still recognizing and responding to the special powers of the literary to open our culture to such expansions.

"More than the usual powder for theory's morning-after headache, Krieger's volume is a compelling argument for theory to acknowledge the very traditions it has sought to discredit and exclude." -- Philosophy and Literature

"Crisp historical summaries... written to be accessible for readers not well versed in theory's terminology and key figures -- one figure being Krieger himself." -- Comparative and General Literature

1. The Institution of Theory

2. The Institution of Theory

3. The Institution of Theory