Items related to Rethinking Democratic Education: The Politics of Reform 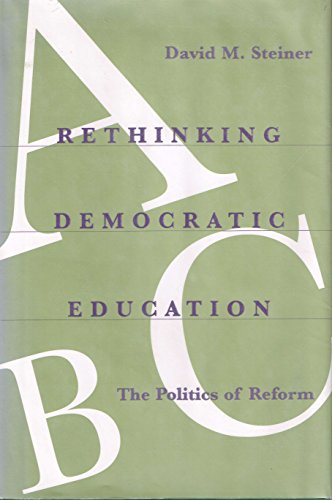 In this timely book David Steiner argues that democratic education should equip citizens to be "the measure of all things." Questioning, criticizing, and reconstructing the language of the day, dissecting the rhetoric of politics, economy, and culture--these are the skills, Steiner contends, needed by those who will one day be the sovereign voices of our society. But this goal is not the focus of current educational reform--which aims at educating "productive citizens"--nor is it encouraged by democratic theorists in colleges and universities.

A Theory of Democratic Education is the first work since John Dewey's to provide a model of education focused on the human capacity to judge and construct a well-measured life--a model in which philosophy, psychology, and pedagogy are brought together in a single, over-arching conception.

"Steiner presents a philosophical analysis of the politics of reform which takes account of several main currents in Western educational thought: ancient Athens, Rousseau, and John Dewey... Steiner's reinterpretation of Deweyan theory is especially intriguing in that he resuscitates Dewey's Hegelian emphasis on faith, meaning, and experience." -- Choice

"An approach to education for democracy through a fusion of the educational and political theories of Rousseau and Dewey, coupled with an analysis of Greek politics." -- Political Studies