Items related to Entangled Evolutions: Media and Democratization in... 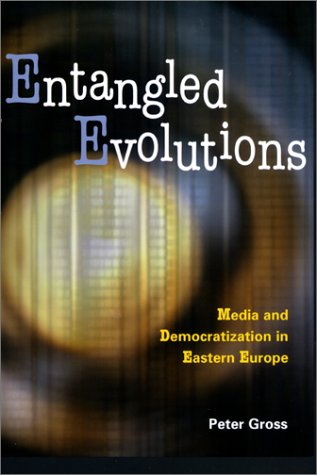 The revolutions of 1989 swept away Eastern Europe's communist governments and created expectations on the part of many observers that post-communist media would lead the liberated societies in establishing and embracing democratic political cultures. Peter Gross finds that it was utopian to hold such expectations of the media in societies in transition.

On the one hand, those countries' media professionals had all learned their jobs under the communist regimes and could not instantly transform themselves into guides for a politically enabled populace, Gross argues. On the other hand, newcomers to the media world, even those who were notable literary figures, viewed themselves as social and political leaders rather than mere informers and facilitators of the resocialization required to form new democracies. The news media have remained highly politicized and partisan.

So how are the media, civil society, and political culture related in societies in transition? And can changes in these relationships be anticipated? To address these questions, Entangled Evolutions examines media in post-1989 Eastern Europe. It studies the effects of privatization of the media, journalists' relations to political figures, institutional structures such as media laws, professional journalistic culture, and the media's relation to their market. Sources include interviews with journalists and politicians, sociological and political data from national surveys, and media audience studies.

Peter Gross is a professor of journalism at California State University-Chico. He was an East European Studies research scholar in 1996 at the Woodrow Wilson International Center for Scholars.

This is a very well researched and highly successful effort to assess the role of the media in Eastern Europe's transitions from authoritarian, Leninist regimes to open societies. The book adds significantly to the current understanding of the post-Communist political cultures as hybrid phenomena, including elements of democratic participation and emerging pluralism, but also residual forms of Communist and pre-Communist mentalities.

(Vladimir Tismaneanu, Professor of Government and Politics, University of Maryland)

This volume delves thoughtfully into the complex nature of the interrelationships of media, civil society, political culture, and democratization. Impressive indeed! The breadth of sourcing itself is breathtaking... An illuminating contribution to our understanding of important forces at work in today's world.

This is a must-read not just for media scholars and journalists, but for political scientists, economists, historians, policymakers, and anyone else who wants to understand the tumultuous changes that have occurred in Eastern Europe.

(Dean Mills, Dean of the Journalism School, University of Missouri-Columbia)

[A] very rich and well-informed reconsideration of the social and media situation in Central and Southeastern Europe.

Very rich and well-informed reconsideration of the social and media situation in Central and Southeastern Europe.