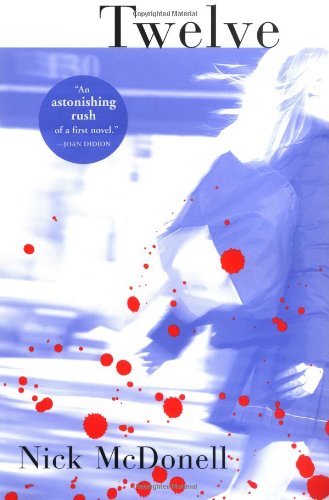 White Mike, a seventeen-year-old prep school dropout and drug dealer, and his privileged peers spend their time partying with sex, drugs, and escalating violence in the pursuit of ever more exotic and dangerous thrills.

On the surface, Nick McDonell's debut novel Twelve (written when the well-connected former prep-schooler was 17) feels like an East Coast Less Than Zero: the laconic style and episodic plot; the privileged ennui, drugs, and pop culture sensibility (with sprinklings of Prada, FUBU, North Face, and Nokia replacing Zero's Armani, English Beat T-shirts, Wayfarer sunglasses, and Betamax); the Christmas break setting; even the italicized flashbacks--it's all there. But Twelve also shares its casual, youthful arrogance with the jaded aggressiveness and jagged style of Larry Clark's Kids.

McDonell has crafted a pulsing narrative that clips along at an after-hours pace, pulling the reader along like an ominous rip tide, shifting easily from the Upper East Side to Harlem to Central Park to introduce a cast of loosely connected characters. White Mike, Twelve's clean-living, Cheerios-loving, milkshake-drinking drug dealer, drives the majority of the barely-there plot. ("Mike uses a teaspoon to eat his cereal, not a big soup spoon, because he likes to have less milk in his mouth with each bite" is about as deep as it gets.) Character development is limited to an easy shorthand ("Long legs, large breasts, blond hair, blue eyes, high cheekbones.") that results in a simple surface-skimming, leaving one too many caricatures of the very youth culture McDonell is writing about. Readers will see the blood-spattered, penultimate set piece coming down Fifth Avenue from page one, but any potential shock value or drama is immediately deflated in Twelve's head-scratching hangover of a denouement. --Brad Thomas Parsons

Nick McDonell was born in 1984 in New York City.

Book Description New York, New York, U.S.A.: Grove Pr, 2002. Hardcover. Condition: New. Dust Jacket Condition: New. 1st Edition. Hardcover, HANDSIGNED + DATED 8/8/02 by NICK McDONELL on the full title page. No inscription and not a bookplate signature. A U.S. 1st Edition/1st Printing with appropriate number line descending through 1. NEW/UNREAD condition, only opened to obtain author's signature and most suitable for collectors. Pristine copy with no bumped corners or bruising to the spine. Flawless dust jacket is protected by a clear plastic archival cover. Bestselling debut novel from prodigy writer written when he was 17. A tale of disaffection, despair, drug use and violence among a group of wealthy Manhattan teenagers during winter break that was translated into over 20 languages and was on all major U.S. bestseller lists. Literary basis for the 2010 film directed by Joel Schumacher starring Kiefer Sutherland and Chace Crawford. 244 pp. Signed by Author(s). Seller Inventory # ABE-9621417483