Items related to Why Be Happy When You Could Be Normal?

Winterson, Jeanette Why Be Happy When You Could Be Normal?

Why Be Happy When You Could Be Normal? 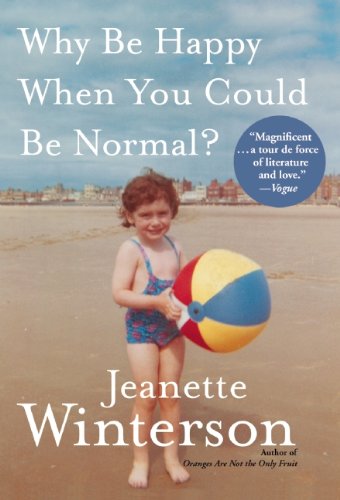 Jeanette Winterson’s novels have established her as a major figure in world literature. She has written some of the most admired books of the past few decades, including her internationally bestselling first novel, Oranges Are Not the Only Fruit, the story of a young girl adopted by Pentecostal parents that is now often required reading in contemporary fiction.

Why Be Happy When You Could Be Normal? is a memoir about a life’s work to find happiness. It's a book full of stories: about a girl locked out of her home, sitting on the doorstep all night; about a religious zealot disguised as a mother who has two sets of false teeth and a revolver in the dresser, waiting for Armageddon; about growing up in an north England industrial town now changed beyond recognition; about the Universe as Cosmic Dustbin.

It is the story of how a painful past that Jeanette thought she'd written over and repainted rose to haunt her, sending her on a journey into madness and out again, in search of her biological mother.

Witty, acute, fierce, and celebratory, Why Be Happy When You Could Be Normal? is a tough-minded search for belonging for love, identity, home, and a mother.

Born in Manchester in 1959 and adopted into a firmly religious family, Jeanette Winterson put herself through higher education and studied at Oxford University. She is the author of numerous novels, including Oranges Are Not the Only Fruit, Sexing the Cherry, and The Passion. Winterson lives in Gloucestershire, UK.

When my mother was angry with me, which was often, she said, ‘The Devil led us to the wrong crib.’

The image of Satan taking time off from the Cold War and McCarthyism to visit Manchester in 1960 – purpose of visit: to deceive Mrs Winterson – has a flamboyant theatricality to it. She was a flamboyant depressive; a woman who kept a revolver in the duster drawer, and the bullets in a tin of Pledge. A woman who stayed up all night baking cakes to avoid sleeping in the same bed as my father. A woman with a prolapse, a thyroid condition, an enlarged heart, an ulcerated leg that never healed, and two sets of false teeth – matt for everyday, and a pearlised set for ‘best’.

I do not know why she didn’t/couldn’t have children. I know that she adopted me because she wanted a friend (she had none), and because I was like a flare sent out into the world – a way of saying that she was here – a kind of X Marks the Spot.

She hated being a nobody, and like all children, adopted or not, I have had to live out some of her unlived life. We do that for our parents – we don’t really have any choice.

She was alive when my first novel, Oranges Are Not the Only Fruit, was published in 1985. It is semiautobiographical, in that it tells the story of a young girl adopted by Pentecostal parents. The girl is supposed to grow up and be a missionary. Instead she falls in love with a woman. Disaster. The girl leaves home, gets herself to Oxford University, returns home to find her mother has built a broadcast radio and is beaming out the Gospel to the heathen. The mother has a handle – she’s called ‘Kindly Light’.

For most of my life I’ve been a bare-knuckle fighter. The one who wins is the one who hits the hardest. I was beaten as a child and I learned early never to cry. If I was locked out overnight I sat on the doorstep till the milkman came, drank both pints, left the empty bottles to enrage my mother, and walked to school. We always walked. We had no car and no bus money. For me, the average was five miles a day: two miles for the round trip to school; three miles for the round trip to church.

Church was every night except Thursdays.

I wrote about some of these things in Oranges, and when it was published, my mother sent me a furious note in her immaculate copperplate handwriting demanding a phone call.

We hadn’t seen each other for several years. I had left Oxford, was scraping together a life, and had written Oranges young – I was twenty-five when it was published.

I dialled the Accrington code and number as instructed, and there she was – who needs Skype? I could see her through her voice, her form solidifying in front of me as she talked.

She was a big woman, tallish and weighing around twenty stone. Surgical stockings, flat sandals, a Crimplene dress and a nylon headscarf. She would have done her face powder (keep yourself nice), but not lipstick (fast and loose).

She filled the phone box. She was out of scale, larger than life. She was like a fairy story where size is approximate and unstable. She loomed up. She expanded. Only later, much later, too late, did I understand how small she was to herself. The baby nobody picked up. The uncarried child still inside her.

But that day she was borne up on the shoulders of her own outrage. She said, ‘It’s the first time I’ve had to order a book in a false name.’

I tried to explain what I had hoped to do. I am an ambitious writer – I don’t see the point of being anything; no, not anything at all, if you have no ambition for it. 1985 wasn’t the day of the memoir – and in any case, I wasn’t writing one. I was trying to get away from the received idea that women always write about ‘experience’ – the compass of what they know – while men write wide and bold – the big canvas, the experiment with form. Henry James did no good when he said that Jane Austen wrote on four inches of ivory – i.e. tiny observant minutiae. Much the same was said of Emily Dickinson and Virginia Woolf. Those things made me angry. In any case, why could there not be experience and experiment? Why could there not be the observed and the imagined? Why should a woman be limited by anything or anybody? Why should a woman not be ambitious for literature? Ambitious for herself ?

Mrs Winterson was having none of it. She knew full well that writers were sex-crazed bohemians who broke the rules and didn’t go out to work. Books had been forbidden in our house – I’ll explain why later – and so for me to have written one, and had it published, and had it win a prize . . . and be standing in a phone box giving her a lecture on literature, a polemic on feminism . . .

The pips – more money in the slot – and I’m thinking, as her voice goes in and out like the sea, ‘Why aren’t you proud of me?’

The pips – more money in the slot – and I’m locked out and sitting on the doorstep again. It’s really cold and I’ve got a newspaper under my bum and I’m huddled in my duffel coat.

A woman comes by and I know her. She gives me a bag of chips. She knows what my mother is like.

Inside our house the light is on. Dad’s on the night shift, so she can go to bed, but she won’t sleep. She’ll read the Bible all night, and when Dad comes home, he’ll let me in, and he’ll say nothing, and she’ll say nothing, and we’ll act like it’s normal to leave your kid outside all night, and normal never to sleep with your husband. And normal to have two sets of false teeth, and a revolver in the duster drawer . . .

We’re still on the phone in our phone boxes. She tells me that my success is from the Devil, keeper of the wrong crib. She confronts me with the fact that I have used my own name in the novel – if it is a story, why is the main character called Jeanette?

I can’t remember a time when I wasn’t setting my story against hers. It was my survival from the very beginning. Adopted children are self-invented because we have to be; there is an absence, a void, a question mark at the very beginning of our lives. A crucial part of our story is gone, and violently, like a bomb in the womb.

The baby explodes into an unknown world that is only knowable through some kind of a story – of course that is how we all live, it’s the narrative of our lives, but adoption drops you into the story after it has started. It’s like reading a book with the first few pages missing. It’s like arriving after curtain up. The feeling that something is missing never, ever leaves you – and it can’t, and it shouldn’t, because something is missing.

That isn’t of its nature negative. The missing part, the missing past, can be an opening, not a void. It can be an entry as well as an exit. It is the fossil record, the imprint of another life, and although you can never have that life, your fingers trace the space where it might have been, and your fingers learn a kind of Braille.

It’s why I am a writer – I don’t say ‘decided’ to be, or ‘became’. It was not an act of will or even a conscious choice. To avoid the narrow mesh of Mrs Winterson’s story I had to be able to tell my own. Part fact part fiction is what life is. And it is always a cover story. I wrote my way out.

Truth? This was a woman who explained the flashdash of mice activity in the kitchen as ectoplasm.

There was a terraced house in Accrington, in Lancashire – we called those houses two-up twodown: two rooms downstairs, two rooms upstairs. Three of us lived together in that house for sixteen years. I told my version – faithful and invented, accurate and misremembered, shuffled in time. I told myself as hero like any shipwreck story. It was a shipwreck, and me thrown on the coastline of humankind, and finding it not altogether human, and rarely kind.

And I suppose that the saddest thing for me, thinking about the cover version that is Oranges, is that I wrote a story I could live with. The other one was too painful. I could not survive it.
From the Hardcover edition.

1. Why Be Happy When You Could Be Normal?

2. Why be Happy when You Could be Normal?

3. Why Be Happy When You Could Be Normal?

4. Why Be Happy When You Could Be Normal? (Signed First Edition)

5. Why Be Happy When You Could Be Normal?