Items related to The Rules of Wolfe (Border Noir)

The Rules of Wolfe (Border Noir) 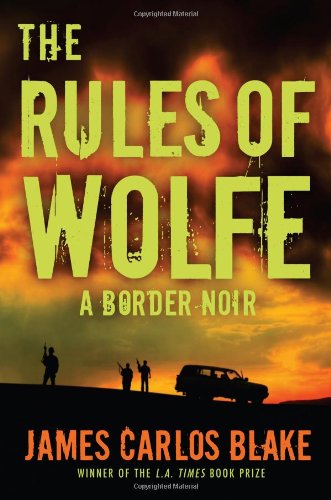 A Men's Journal, Deadly Pleasures, and Latinidad Best Book of the Year

Eddie Gato Wolfe is a young, impetuous member of the Wolfe family of Texas gun-runners that goes back generations. Increasingly unfulfilled by his minor role in family operations and eager to set out on his own, Eddie crosses the border to work security for a major Mexican drug cartel led by the ruthless La Navaja.

Eddie falls for a mysterious woman named Miranda, whom he learns too late is the property of an intimate member of La Navaja’s organization. When they're discovered, the violent upshot forces Eddie and Miranda to run for their lives, fleeing into the deadly Sonora Desert in hope of crossing the border to safety. But La Navaja’s reach is far and his lust for revenge insatiable. If La Navaja’s men don’t kill Eddie and Miranda, the brutal desert just may. Their only hope: help from the family that Eddie abandoned.

At once a riveting thriller and an inside look at the blood-drenched Mexican drug trade, The Rules of Wolfe is another classic crime novel from a writer Entertainment Weekly calls, "one of the greatest chroniclers of the mythical American outlaw life."

James Carlos Blake is the author of eleven novels. Among his literary honors are the Los Angeles Times Book Prize, Southwest Book Award, Quarterly West Novella Prize, and Chautauqua South Book Award. He is a member of the Texas Institute of Letters and lives in Arizona.

"Harrowing and suspenseful. . . . Blake's portrayal of the dangers of the immigrants' crossing is better than any journalistic account I've seen. . . . Readers who enjoy action, adventure and lethal weaponry will relish every moment." Patrick Anderson, Washington Post

"[Blake] writes of grisly death and violence like a singing Gaelic bard. . . . The Rules of Wolfe could have been ripped from today’s headlines. . . . [A] tough, honed-to-the-bone thriller. . . . [He] writes like . . . an avenging angel that dips its pen in blood."—Dallas Morning News

An epic chase. . . . The breakneck-speed Wolfe, with its focus on the bad guys, is poised to introduce Blake to a broader audience.” Men’s Journal

Blake’s prose is muscular, his dialogue and details are keenly observed . . . a new spin on the hard-edged outlaw tale. . . . [A] fascinating family portrait . . . his characters are lively and so is his plot . . . one hell of a ride.” Booklist (starred review)

"Blake doesn't just know the territory, the language and the players he also knows how to tell a great story." Shelf Awareness

"[James Carlos Blake's] characters are criminals and types, but they are never just typical . . . [they] are people we get to know well, and we care about what happens to them. . . . The plot may make readers call this book genre noir,” but the sentences show Blake’s literary chops.” Waxwing

"This sand-blasted odyssey is quick, bloody and beautiful with prose as eloquent and unexpected as a cactus flower." Madison County Herald

1. The Rules of Wolfe (Border Noir)

2. The Rules of Wolfe (Border Noir)