Items related to The Devil at Large: Erica Jong on Henry Miller

The Devil at Large: Erica Jong on Henry Miller 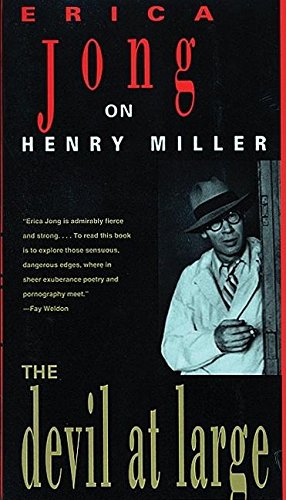 In the perfect match of author and subject, poet and novelist Erica Jong charts the life and legacy of Henry Miller, the archetypal sensualist whose notorious Tropic of Cancer and subsequent books ultimately changed the boundaries of literature.

The book begins with a question: Why Henry Miller? "Miller remains among the most misunderstood of writers - seen either as a pornographer or a guru, a sexual enslaver or a sexual liberator, a prophet or a pervert. All the questions his life and oeuvre raise about the role of the writer in society, the impact of books on sexual politics, the impact of sexual politics on books, the threat of censorship to free speech and written expression are, unfortunately, as fresh today as they ever were". Part biography, part memoir, part critical study, part exploration of sexual politics in our time, The Devil at Large is an event: a book that promises to rescue Miller from the facile charges of misogyny, anti-Semitism, and titillation that have been lobbed at him over the years, and brilliantly captures the exuberance, audacity, and energy that defined his life and art. More than that, it is a reunion between a young writer and her mentor. In 1974, while Fear of Flying was still a relatively obscure first novel, Erica Jong received an enthusiastic fan letter from Henry Miller, then an old man of eighty-three. Miller credited himself with "discovering" Jong, and his faithful correspondence guided her through a year of enormous change. The two writers - chastised and celebrated for their lusty prose, accused of conflating autobiography with fiction in their respective generations - found they were kindred spirits, and began a friendship that would last until Miller's death in 1980. "Make it all up!" was Miller's appeal to Jong to become his biographer. But in reexamining Miller, Jong has not had to fictionalize. She has imparted a deeper understanding of a life whose dramatic particulars have longsince been mythologized, dramatized, and cannibalized by those in search of a lusty life story. Jong puts the works, the letters, the loves through a prism that clarifies the creative impulse, making this slim book a quintessential chronicle of a writer's life and a mirror of our own times. "Always the flesh and the vision together", Anais Nin said of Miller. The Devil at Large asks its readers to look anew at these elements and come to a new appreciation of a twentieth-century visionary and prophet.

Jong (Any Woman's Blues, 1989, etc.) recalls her friendship with Henry Miller (1891-1980), and writes a critical biography of him and an annotated bibliography of his works. Also included are letters between Miller and Jong and companion pieces they wrote for The New York Times's Op-Ed page, praising each other's spirit. Spirit is the keynote here, with Miller's life force billowing up in quotations from his works and flattening Jong's commentary. Jong is at pains to avoid academicism: ``Since I long ago gave up the Ph.D. program for the life of a professional author, I approach Miller with a writer's rather than a scholar's point of view.'' Too often, though, it's the hand of the academy that speaks: ``Henry was so enthralled by women that he sought to demystify their mysterious parts through the violent verbal magic of his books. The violence is rooted in a sense of self-abnegation and humiliation before them. He is, as the Freudians would say, counterphobic.'' Jong makes many good points, though, showing that, midway through his life, Miller had already written everything of his that would last. Surveying university courses, she finds Miller missing, although she ranks him as America's greatest force of nature since Whitman. And Miller is remembered, Jong thinks, for all the wrong reasons, while his best work (the ``luminous'' and ``transcendental'' The Colossus of Maroussi and certain essays) goes begging for readers. Jong's defense of Miller against charges of anti-Semitism comes off better than her cotton balls against feminists, whom she praises while attacking them, using dated rhetoric (``Millett makes a brilliant case for Henry Miller's autobiographical protagonist as a textbook study of patriarchal attitudes, but she fails to go farther, to explore the source of those attitudes, namely the male terror and envy of female power''). Backfire brains markswoman, but not fatally. -- Copyright ©1993, Kirkus Associates, LP. All rights reserved.

1. The Devil at Large: Erica Jong on Henry Miller (Paperback or Softback)

3. The Devil at Large: Erica Jong on Henry Miller

4. The Devil at Large: Erica Jong on Henry Miller

5. The Devil at Large: Erica Jong on Henry Miller

6. The Devil at Large: Erica Jong on Henry Miller

7. The Devil at Large: Erica Jong on Henry Miller

8. The Devil at Large: Erica Jong on Henry Miller

9. The Devil at Large: Erica Jong on Henry Miller