Items related to Having Everything

L'Heureux, John Having Everything 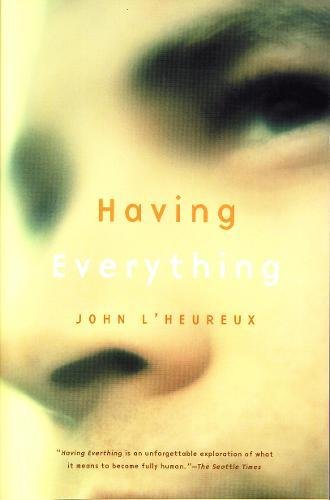 Philip Tate is a man who has everything -- youth, looks, a beautiful wife and perfect family, a distinguished deanship at Harvard. Having Everything is the story of a nighttime drive that leads Philip to jeopardize it all for a moment's flirtation with the forbidden. For on that drive he will collide with the Kizers -- beautiful, troubled Dixie and brilliant, kinky Hal. By stepping, without knocking, into the Kizers' house and into the midst of their sad marriage, Philip sets in motion the near ruin -- and perhaps the salvation -- of his entire world. Fierce, ironic, and beautifully told, Having Everything reminds us that sometimes -- in marriage, and in life -- having everything is not enough. "A master of understated, ominous moments in a marriage in which not asking a question can be more disastrous than asking it.... Sharp, moving, poignant." -- Lev Raphael, The Washington Post Book World; "John L'Heureux is perhaps today's most frightening novelist because his characters, for all their strange behavior, are not freaks or misfits. They are the people we see and know.... Having Everything is an unforgettable exploration of what it means to become fully human." -- Richard Wakefield, The Seattle Times; "A master of spoof and irony.... As the book moves forward to a conclusion that readers will sense is going to be catastrophic, it is impossible to stop turning its pages." -- Carol Herman, The Washington Times

Had Diogenes lived today, instead of searching for an honest man, he would have been swinging his lantern in hopes of hitting a well-balanced psychiatrist. Or so fiction would generally have one believe. Psychiatrists in novels generally fall into one of two categories: they are either cold, insensitive, and all-around clueless when it comes to their nearest and dearest (see Fear of Flying's Benjamin Wing) or they are wackier than their patients--often in dark and twisted ways. Philip Tate, the hero of John L'Heureux's Having Everything, belongs to this second group. Married to a beautiful woman, the father of two terrific children, and recently appointed to a prestigious position at Harvard Medical School, Tate would seem to have an ideal existence. Too ideal, of course, or there'd be nothing to write a novel about:

They had everything, their kids and their lives and their health, and they were good-looking, with enough money, and they loved one another--didn't they?--and yet they were wrecking it, somehow, in spite of themselves.

Tate's wife, Maggie, it seems, is an alcoholic. And Tate himself struggles with the compulsion to break into stranger's houses; one night, he goes too far, breaking into a colleague's house with consequences that will haunt him through the rest of the novel. In Having Everything, L'Heureux suggests that success is only skin deep, and demonstrates how difficult it really is to have it all. --Margaret Prior About the Author:

John L'Heureux has taught, for the past twenty-five years, at Stanford University.

5. Having Everything [Paperback] L'Heureux, John

6. Having Everything [Paperback] L'Heureux, John