Items related to India: A History 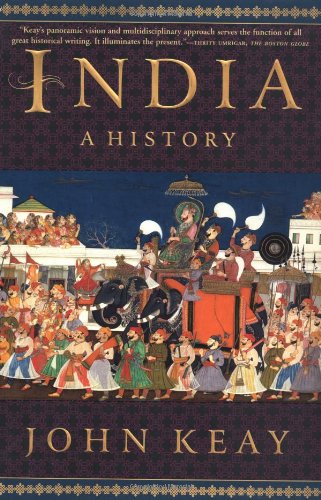 John Keay's India: A History is a probing and provocative chronicle of five thousand years of South Asian history, from the first Harrapan settlements on the banks of the Indus River to the recent nuclear-arms race. In a tour de force of narrative history, Keay blends together insights from a variety of scholarly fields and weaves them together to chart the evolution of the rich tapestry of cultures, religions, and peoples that makes up the modern nations of Pakistan, India, and Bangladesh. Authoritative and eminently readable, India: A History is a compelling epic portrait of one of the world's oldest and most richly diverse civilizations.

The history of what is now India stretches back thousands of years, further than that of nearly any other region on earth. Yet, observes historian John Keay, most historical work on India concentrates on the period after the arrival of Europeans, with predictable biases, distortions, and misapprehensions. One, for example, is the tendency to locate the source of social conflict in India's many religions--to which Keay retorts, "Historically, it was Europe, not India, which consistently made religion grounds for war."

Taking the longest possible view, Keay surveys what is both provable and invented in the historical record. His narrative begins in 3000 B.C., with the complex, and little-understood, Harappan period, a time of state formation and the development of agriculture and trade networks. This period coincides with the arrival of Indo-European invaders, the so-called Aryans, whose name, of course, has been put to bad use at many points since. Keay traces the growth of subsequent states and kingdoms throughout antiquity and the medieval period, suggesting that the lack of unified government made the job of the European conquerors somewhat easier--but by no means inevitable. He continues to the modern day, his narrative ending with Indian-Pakistani conflicts in 1998.

Fluently told and well documented, Keay's narrative history is of much value to students and general readers with an interest in India's past and present. --Gregory McNamee

John Keay is a writer, broadcaster and historian whose books include `Into India', `India Discovered', `When Men and Mountains Meet', `Highland Drove', `The Honourable Company: A History of the English East India Company', `The Great Arc', `China: A History' and (with his wife, Julia Keay) the `Collins Encyclopaedia of Scotland'. He has travelled extensively in India and the Far East, and specialised in Asian history and current affairs.