Items related to Neutral Buoyancy: Adventures in a Liquid World 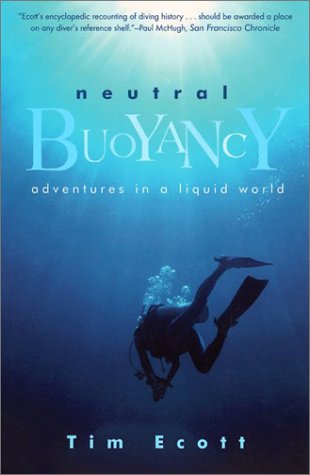 In Neutral Buoyancy, journalist and diver Tim Ecott takes you on a guided tour of the history of undersea exploration and the emergence of diving culture. He tells the extraordinary story of man's attempts to breathe underwater, from the sponge divers described by Aristotle, to the development of sixteenth-century diving bells, to the invention of modern scuba equipment. Along the way, Ecott intersperses the story with his own thrilling adventures, from the waters of the South Pacific to the remote islands of the Seychelles, from explorations in the clear, flowing tides of Sardinia to a near-death experience in the cold gray depths of the English Channel. Filled with engaging stories of humanity's conquest of the undersea world -- and heart-pounding action that will leave you breathless -- Neutral Buoyancy is a compelling blend of history and adventure, an exciting overview of the world of undersea diving. "As elemental, entertaining, and stimulating as the environment it traces." -- Kirkus Reviews "Engaging ... Neutral Buoyancy will certainly become cult reading for divers." -- Alexander Urquhart, The Times Literary Supplement "Ecott's encyclopedic recounting of diving history ... should be awarded a place on any diver's reference shelf." -- Paul McHugh, San Francisco Chronicle

In Neutral Buoyancy, BBC journalist Tim Ecott recounts his ongoing adventures in the "liquid world" of scuba diving, from battling rip tides off the Dorset coast in southwest England to exploring the shark-rich waters of the Caribbean, musing along the way on the history and meaning of humanity's fascination with diving and reflecting on how his underwater experience has reshaped his life.

Four days after my mother's funeral I went scuba diving for the first time.... Surfacing from a dive ... I often think it strange that this mind-cleansing, emotionally charged experience is one that my mother never knew I had. It is something akin to the sense of regret I feel that she never met my daughter, born a few years after her passing. How odd that something so wonderful was not part of our shared experience.

Be warned: if you are already a diver, Neutral Buoyancy will heighten the sense that you are wasting far too much precious time on dry land. For the rest, even if your underwater ventures are largely confined to the bath, this book will have you contemplating a trip to your local swimming pool at the very least. Truly inspirational. --Alex Hankin, Amazon.co.uk

Plunging off the shores of Florida, Australia, the Western Pacific islands and other coastal locales, BBC world service reporter and producer and certified dive-master Ecott provides a fascinating, albeit uncritical, look at the fast-growing world of undersea diving. Vivid descriptions of what's to be seen show skeptics what they're missing: coral as green as a "fine piece of carved jade," as scarlet as a "humming-bird feather" and as pink as the "petals of a carnation in a buttonhole." Along the way, he recounts the history of the sport, which has grown from a risky enterprise practiced by a brave few to a far more mainstream, increasingly high-tech recreational endeavor. In interviews, the sport's pioneers (crusty individualists, not surprisingly) express some resentment toward Jacques Cousteau; they believe he stole glory due others. Though Ecott at times suggests discomfort with the diving world's competitive ethos, he seems reluctant to criticize it outright or to question the sport's cult of extreme risk-taking. And while mindful of the sport's dangers (in one particularly terrifying incident, Ecott nearly dies in the English Channel), he emphasizes its spiritual appeal: the title refers to a state of equilibrium that scuba divers aspire to a feeling of weightlessness. Agent, Natasha Fairweather of A.P. Watt. (July)Forecast: Ecott's journalistic acumen his pieces have appeared in Esquire, the Economist, National Geographic and elsewhere makes this an above-average look into a microculture. Lifestyle magazine coverage, plus word-of-mouth recommendations or summer-oriented displays, will lead fans and curious readers alike to this title.