Items related to The Middle East and Islamic World Reader 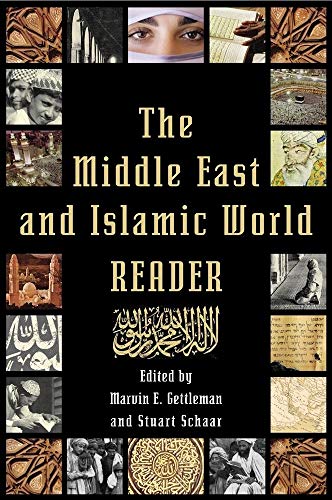 The Muslim world is tremendously rich and diverse, yet few Westerners are familiar with the writings and teachings of a culture that in recent months has come to the forefront of world events. In their insightful new anthology The Middle East and Islamic World Reader, historians Marvin E. Gettleman and Stuart Schaar have assembled a broad selection of documents and contemporary scholarship to give a view of the history of the peoples from the core Islamic lands, from the Golden Age of Islam to today. With carefully framed essays beginning each chapter and brief introductory notes accompanying over seventy readings, the anthology reveals the multifaceted societies and political systems of the Islamic world. Selections range from theological texts illuminating the differences between Shiite and Sunni Muslims, to diplomatic exchanges and state papers, to memoirs and literary works, to manifestos of Islamic radicals. The anthology spans the distance from Tunisia to India through writings by such key figures as the early Muslim historian Ibn Khaldun, Turkish founding father Kemal Ataturk, Israeli statesman David Ben-Gurion, and the Iranian revolutionary leader Ayatollah Khomeini. The readings chart the effects of the Islamic world's interactions with outsiders -- from the invasions of Central Asian nomads and Crusading Europeans in the Middle Ages, to European colonization in the nineteenth and twentieth centuries -- as well as its own internal evolution, through accounts of peasants, urban workers, and the experience of Muslim women. Wide-ranging and thought-provoking, The Middle East and Islamic World Reader is a fascinating historical survey of complex societies that -- now more than ever -- are crucial for us to understand.

Marvin E. Gettleman is the coeditor of the best-selling anthology Vietnam and America. He is emeritus professor of history at Brooklyn Polytechnic University.

The many facets of Middle Eastern history and politics are admirably represented in this far-ranging anthology. The editors include excerpts from the Quran and medieval Islamic philosophers, but the bulk of the book focuses on the complex response of the Islamic world to modernity and Western hegemony. Ataturk's efforts to reform Turkey along modern, secular lines are covered, as is Nasser's program of "Arab socialism" in Egypt, Michel Aflaq's Baathist program of pan-Arab nationalism and Jinnah's championing of a Muslim state before the partition of India. The fundamentalist backlash against modernization and Western influence is also well represented in several jeremiads by conservative clerics, Osama bin Laden's infamous call to Muslims to "kill American's and plunder their money wherever and whenever they find it," and a Taliban decree banning, among other things, music, kite-flying and "tight and charming clothes" for women. The Israeli-Palestinian conflict is given an even-handed treatment based on seminal documents from the Balfour declaration to the ill-fated peace proposals that preceded the most recent intifada. In addition to original documents, speeches, interviews and manifestos, the editors also reprint academic studies on the economic and social history of the region, and an exchange between Bernard Lewis and Edward Said on the theme of "the clash of civilizations." The editor's own ample introductory material places each selection in its historical and political context, and by itself constitutes a stimulating guide to the subject.
Copyright 2003 Reed Business Information, Inc.