Items related to The Sword and the Cross: Two Men and an Empire of Sand

Fleming, Fergus The Sword and the Cross: Two Men and an Empire of Sand

The Sword and the Cross: Two Men and an Empire of Sand 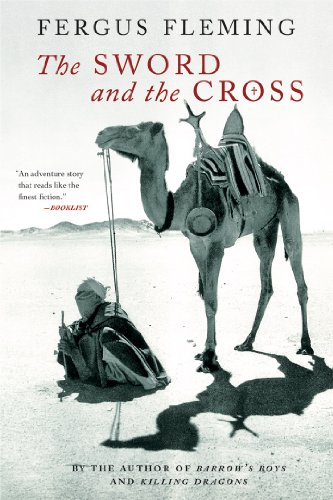 1.
A brief history of Algeria. Back in the 17th century it was controlled by Ottomans but controlled by Day pirates whose reputation for violence was known around the world. In 1858 a French consul visited the area and when he refused to pay back a debt, was injured by a Day representative. France seized on this to move into Algeria and found that conquering the Day wasn’t as difficult as they thought. France half-heartedly controlled the quasi-anarchic colony at first but the rule of Napoleon IV gradually strengthened their involvement. See p. 11 for descript of land’s horrors. By late 19th c the people of the land are severely dispossessed.

2.
Charles Eugene, Vicomte de Foucauld is introduced. Brought up as an orphan, rootless, spoiled by grandparents and friendless, he lost his religious faith in his teens and became a layabout, filling his time at the dreaded military academy with pranks on the higher officers. He struggled w. depression and an uncompromising appetite for food. After a particular prank, he was expelled from the academy and sent to Africa, where he was expelled after it was discovered that the wife he had taken with him was actually a mistress. In 1881 France invaded Tunisia and the tribal leader Bu Amama invaded Algeria in retaliation, Foucauld reenlisted. France’s struggle to defend Algeria was wrapped up in a new plan to link Algeria to France’s colonies in the south by conquering the Sahara and effectively colonizing all of West Africa. This allowed them to import goods from these southern country by building a railroad across the Sahara, which they hypothesized contained other great resources.

3
A description of the Sahara which has been controlled by Tuareg nomads whose fierce grip on the area had dissuaded all previous would-be invaders. In 1861 an ambitious young French explorer Duvierier revealed that the Tuareg was not as hostile as they seemed and although subsequent murders disproved this, the French gripped by a new wave of colonialism and a quest for rapidly diminishing national prestige chose to try to overtake the Tuareg anyway. Fueled in part by a French engineer’s dream of a Transsaharan railway. See the last pages of the chapter for a description of an ill-fated expedition into the territory that eventually disintegrated into death and cannibalism.

4.
Henry Laperrine is introduced. Foucauld’s opposite in every way where Foucauld lounged, Lepperine applied himself in every way. Foucauld was grossly overweight and languid, Lepperine thin and temperamental, etc etc” (p 42). Laperrine unlike Foucauld was intensely devoted to the military and eventually to reforming it. The two develop a friendship while stationed together during the Bu-Amama war but eventually Foucauld drops out to travel to Morocco, a country wary of French invasion but with boundaries are fluid to the west. Trained by a French explorer and accompanied by a scraggly sickly Jew with connections in Morocco, Foucauld posing as a rabbi discovers that the reigning class is not opposed to invasion (they see it as a call to civilization), although there are bandits throughout the country. Foucauld is praised when he comes home and eventually falls under the influence of a priest who convinces him to become a Trappist monk.
5.
After attempts to take the Sahara (now open to exclusively to France after the Anglo-French convention) via the North (Algeria) fail when the conquered oases are too disparate for the consolidation of rule, France decides to conquer the area from the south (i.e. Sudan) up. Laperrine joins a band of Senegalese hooligans” who, so far removed from France, are militant commandos. They take Timbuku but only after tremendous bloodshed at the hands of the Tuareg. Eventually Laperrine in an effort to take Lake Chad raids a Tuareg camp in retaliation for the Tuareg’s previously humiliating raid at Timbuktu. He becomes a legend and French morale is boosted. Seeking solitude he is dispatched to a place he sees as the key to French conquest Forth MacMahon. There is placed in command of a group of Saphi camelmen.

6.
The story of the Jew-hating Algerian entrepreneur who riles the natives up with his conspiracy theories before eventually organizes an expedition to tame the Sahara that ends in a dramatic shootout that makes him a French legend. France’s disastrous attempts at colonization are pushed further into the forefront.

7.
We’re introduced to one of the greatest Saharan explorers Fernand Foreau, who as part of a three-pronged French attack on the crucial Lake Chad ventured into the Sahara with a gargantuan troop that included 381 well-armed troops. Overburdened with supplies, the camels die and the Tuareg attack, but are subdued. Meanwhile a separate army the Central African Mission attempts to take the land, committing incredible and gratuitous atrocities to intimidate the Tuareg, and when their two leaders renounce France, they are eventually overtaken in mutiny...... The armies eventually converge in Chad and although they take the town, they leave chaos around them, failing to effectively secure the area.

8.
A discourse on camels is followed by a description of the taking of all-important In Salah, which is conquered in the guise of scientific discovery (a geologist goes out to examine and is accompanied by 150 troops for self-defense,” who take the land from Morocco). Meanwhile Foucauld is having trouble adjusting to Trappist life, continuously rebuffed by his elders (who consider him a roughneck) when he tries to set up his own order. He buys property on the Mount of Beatitudes but discovers it’s a scam.

9.
Foucauld ventures out to Beni Abbes where he sets up his monastery and tries to convert the natives, trying to serve by example where other missionaries have failed by preaching. A discussion of slavery and how Foucauld was told to go along with it despite his moral objections. Foucauld is used as a pawn by the military, doing reconaissance work, but is also militaristic himself, being called imprudent” for insisting that Morocco be taken.

10.
Laperrine is encharged with reorganizing the inefficient and expensive French control of the Tuat. He is in charge of what is essentially a police force, but turns it into an army when he raids a neighboring oasis out of retaliation. He forces an influential Hoggar ruler out of business Laperrine had to proceed with a conflicting mix of violence, diplomacy and intrigue.” He brings in Foucauld in order to show the Tuareg that French rule is peaceful and in order to keep an eye on the Hoggar without contravening the legislation that forbids him to establish new garrisons south of the Tuat

11-12
Laperrine enlists the help of the only people who have the maneuvering skill of Tuareg rival Berber nomads called the Chaamba. See quote p 178. Foucould, while crossing to In Salah, petitions to settle down and establish his monastery somewhere in the Hoggar but is constantly rebuffed.

13
Foucould settles in a remote mountains pot a forsaken place” called Tumanrasset. Lepperine gets tribal leader Moussa to surrender to Hoggar. Foucould aims to civilize” (Europeanize) the Tuareg he becomes a cult hero. He gains a disciple He gains a disciple who eventually cant handle the ascetism and Foucould the fantatical taskmaster. He grows frustrated when Moussa tries to convert the natives to Islam, not Christianity, and finds himself w/o a congregations

14
Lepperine takes back a crucial salt mine from raiders. Forced to eat his camels. He takes advantage of Foucould as the perfect information source.

15
W/o permission Laperrine moves in on territory that is supposedly neutral ground between France and the Ottomon Empire, raising the ire of his higher-ups in Paris. Laperrine becomes disillusioned with the Sahara campaign and sickly. He returns to France to

Adventure writer and historian Fleming (Barrow's Boys, etc.) turns to French colonial Africa for his latest chronicle of historical (mis)adventure. His meticulous research and fascination with the physical hardships faced by men bent on discovery and conquest are on impressive display. Following the sometimes parallel, sometimes intertwining biographies of Charles de Foucauld and Henri Laperrine, Fleming reconstructs the French colonial crusade in northern Africa that began with France's conquest of Algeria in 1830. Following a series of disgraces in the imperialist race, France needed the Sahara to resurrect its honor on the world's stage. Fleming concludes, "France was conquering Africa just for the sake of it." Foucauld and Laperrine met as soldiers during the Bou-Amama war in Algeria in 1881, and while Laperrine became a career soldier and Foucauld matured from a hedonistic womanizer into an evangelical ascetic, they remained friends until Foucauld's assassination by Muslim fundamentalists in 1916. Until their deaths (Laperrine died of thirst amid the dunes after a plane crash), the two men dedicated themselves to France's cause with zeal. As Fleming writes, "Evangelization was the mortar that imperialists hoped would turn the desert from conquered territory to complaisant colony," and while Foucauld became "a pawn in the colonial game," Fleming recognizes that most likely "he used the military as much as they used him." What emerges most notably from this dense, detailed history is Fleming's description of the colonialists flirting time and time again with a desert seemingly inimical to human life. As Fleming concludes, "The tragedy of their existences lay not so much in time as in landscape... the Sahara was the same after their deaths as before." 3 maps.
Copyright 2003 Reed Business Information, Inc.

Fleming's chronicle of France's fight to cross the Sahara to colonize North Africa focuses on two men, Charles de Foucauld and Henri Laperrine. De Foucauld is described as an aristocratic playboy turned hermit and monk. Laperrine, a shadowy figure, was the creator of the Camel Corps and was seen as a pragmatic man, violent and scheming. This story of "two extraordinary men who lived inan extraordinary place at an extraordinary time" follows Laperrine's travels across the desert between 1904 and 1909 with de Foucauld as his guide and interpreter. Drawing on many of de Foucauld's letters and other writings, Fleming describes building a cabin of palm branches, then constructing one with stones and mud; de Foucauld bitten by a horned viper (taking a month to walk again); the shortage of food and water presenting a serious problem; and a lack of hygiene causing concern. When the camels lagged, Laperrine told his men to eat them. "It was a question of sacrificing men or animals. I did not hesitate." This adventure story reads like the finest fiction. George Cohen
Copyright © American Library Association. All rights reserved

1. The Sword and the Cross: Two Men and an Empire of Sand

2. The Sword and the Cross: Two Men and an Empire of Sand

3. The Sword and the Cross: Two Men and an Empire of Sand [Paperback] Fleming, Fergus

4. The Sword and the Cross: Two Men and an Empire of Sand [Paperback] Fleming, Fergus