Items related to The Battle: A New History of Waterloo

Barbero, Alessandro The Battle: A New History of Waterloo

The Battle: A New History of Waterloo 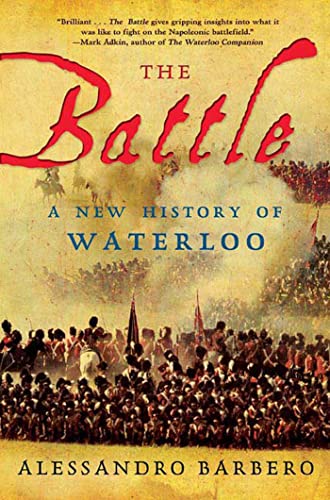 At Waterloo, some 70,000 men under Napoleon and an equal number under Wellington faced one another in a titanic and bloody struggle. In the end, as John Keegan notes, contemporaries felt that Napoleon's defeat had "reversed the tide of European history." Even 190 years later, the name Waterloo resounds.

Italian historian Alessandro Barbero's majestic new account stands apart from previous British and French histories by giving voice to all the nationalities that took part. Invoking the memories of British, French, and Prussian soldiers, Barbero meticulously re-creates the conflict as it unfolded, from General Reille's early afternoon assault on the chateau of Hougoumont, to the desperate last charge of Napoleon's Imperial Guard as evening settled in. From privates to generals, Barbero recounts individual miracles and tragedies, moments of courage and foolhardiness, skillfully blending them into the larger narrative of the battle's extraordinary ebb and flow. One is left with indelible images: cavalry charges against soldiers formed in squares; the hand-to-hand combat around farmhouses; endless cannon balls and smoke. And, finally, a powerful appreciation of the inevitability and futility of war.

ALESSANDRO BARBERO is professor of Medieval History at the University of Piemonte Orientale in Vercelli, Italy. He is the author of Charlemagne: Father of a Continent, and also of several historical novels, one of which, also set in the Napoleonic age, won the Strega Prize, Italy's most distinguished literary award.

This new and valuable history of the 1815 French defeat begins with a minimum of background for the non-Napoleonic student, but does superlatively well once Wellington and Napoleon have arrayed their armies for battle (and does not forget the Prussians waiting in the wings). The narrative is unusually accessible, and as experienced readers march on, they will find some novel insights and analyses. For Barbero, cavalry was not on the whole effective, but it could usefully suppress artillery, a welcome change from the usual denigration of everybody's equine forces (even the British are given credit for superior horses). The role of the Prussians, and also of German allied troops in Wellington's ranks, is studied in much more detail than in more Anglocentric accounts, and that many of the Prussians were half-trained militia is emphasized. Finally, Napoleon's army did not go off completely thrashed and in disarray, but substantially maintained order and discipline for several days. The author also does a better job than many popular historians in dealing with factors such as rate of fire, accurate range and the sights, sounds and smells of a Napoleonic battlefield. And while rejecting certain "patriotic myths," he supports the concept of Waterloo as a battle of unusual intensity. (July)
Copyright © Reed Business Information, a division of Reed Elsevier Inc. All rights reserved.

1. The Battle: A New History of Waterloo

2. The Battle: A New History of Waterloo

3. The Battle: A New History of Waterloo

4. The Battle: A New History of Waterloo Barbero, Alessandro and Cullen, John

5. The Battle: A New History of Waterloo Barbero, Alessandro and Cullen, John

6. The Battle: A New History of Waterloo