Items related to Fusiliers: The Saga of a British Redcoat Regiment in...

Urban, Mark Fusiliers: The Saga of a British Redcoat Regiment in the American Revolution

Fusiliers: The Saga of a British Redcoat Regiment in the American Revolution 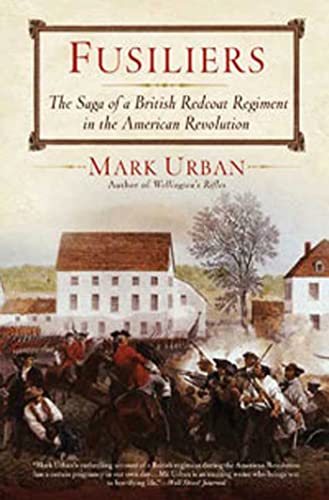 A unique perspective on the American Revolution, seen through the eyes of a redcoat regiment.

From Lexington Green in 1775 to Yorktown in 1781, one British regiment marched thousands of miles and fought a dozen battles to uphold British rule in America: the Royal Welch Fusiliers. Their story, and that of all the soldiers England sent across the Atlantic, is one of the few untold sagas of the American Revolution, one that sheds light on the war itself and offers surprising, at times unsettling, insights into the way the conflict was conducted on both sides. Drawing on a wealth of previously unused primary accounts, Mark Urban describes how British troops adopted new tactics and promoted new leaders, showing how the foundations were laid for the redcoats' subsequent heroic performance against Napoleon. But the letters from members of the 23rd and other archival accounts reveal much more than battle details. Living the revolution day-to-day, the Fusiliers witnessed acts of kindness and atrocity on both sides unrecorded in histories of the war. Their observations bring the conflict down to human scale and provide a unique insight into the inner life of the soldier in the late eighteenth century.

Mark Urban is diplomatic editor of the BBC's Newsnight and a former defense correspondent for the Independent. He is the author of The Man Who Broke Napoleon's Codes and of Wellington's Rifles, the story of the British soldier fighting against Napoleon in Wellington's army. He lives in London.

The Royal Welch Fusiliers, who became the most celebrated British corps in the battle for America and served from the initial skirmish at Lexington in 1775 through the surrender at Yorktown in 1781, provide a narrative that mirrors the wider story, according to Urban (Wellington's Rifles). Drawing on letters and diaries, Urban paints an often grim but ultimately heroic picture of the life of the ordinary soldier fighting an unpopular war in a hostile environment. The Royal Welch Fusiliers—few of whom were Welsh—surrendered at Yorktown as a sadly depleted party of a few dozen men, but they and their leaders had learned important tactical lessons in fighting the Americans, especially the necessity of rapid manoeuvre. Former Fusilier officers like Harry Calvert would use the bitter lessons of America to educate an army that one day would defeat Napoleon. Urban, diplomatic editor of BBC's Newsnight, offers a British-army-centered version, but is admirably evenhanded in his analysis and conclusions. Readers interested in military history will appreciate this insightful and sobering perspective on soldiering in the 18th century. (Nov.)
Copyright © Reed Business Information, a division of Reed Elsevier Inc. All rights reserved.

1. Fusiliers: The Saga of a British Redcoat Regiment in the American Revolution

2. FUSILIERS: THE SAGA OF A BRITISH