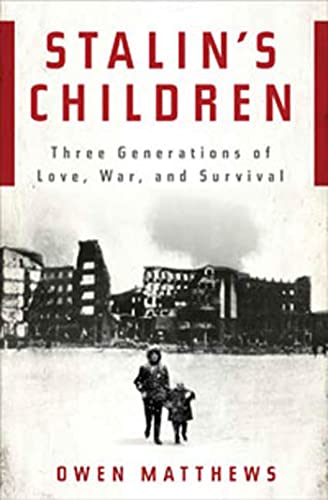 A transcendent history/memoir of one family's always passionate, sometimes tragic connection to Russia.

On a midsummer day in 1937, a black car pulled up to a house in Chernigov, in the heart of the Ukraine. Boris Bibikov―Owen Matthews's grandfather―kissed his wife and two young daughters good-bye and disappeared inside the car. His family never saw him again. His wife would soon vanish as well, leaving Lyudmila and Lenina alone to drift across the vast Russian landscape during World War II. Separated as the Germans advanced in 1941, they were miraculously reunited against all odds at the war's end.

Some twenty-five years later, in the early 1960s, Mervyn Matthews―Owen's father―followed a lifelong passion for Russia and moved to Moscow to work for the British embassy. He fell in and out with the KGB, and despite having fallen in love with Lyudmila, he was summarily deported. For the next six years, Mervyn worked day and night to get Lyudmila out of Russia, and when he finally succeeded, they married.

Decades on from these events, Owen Matthews―then a young journalist himself in Russia―came upon his grandfather's KGB file recording his "progress from life to death at the hands of Stalin's secret police." Stimulated by its revelations, he has pieced together the tangled and dramatic threads of his family's past and present, making sense of the magnetic pull that has drawn him back to his mother's homeland. Stalin's Children is an indelible portrait of Russia over seven decades and an unforgettable memoir about how we struggle to define ourselves in opposition to our ancestry only to find ourselves aligning with it.

"I came to Russia to get away from my parents," writes Matthews. "Instead I found them there, though for a long time I didn't know it or refused to see it. This is a story about Russia and my family, about a place which made us and freed us and inspired us and very nearly broke us. And it's ultimately a story about escape, about how we all escaped from Russia, even though all of us―even my father, a Welshman, who has no Russian blood, even me, who grew up in England―still carry something of Russia inside ourselves, infecting our blood like a fever."

Owen Matthews was born in London and spent part of his childhood in America. He studied modern history at Oxford University before beginning his career as a journalist in Bosnia. In 1995 he accepted a job at the Moscow Times, a daily English-language newspaper, and soon thereafter discovered his grandfather's file. In 1997 he became a correspondent at Newsweek magazine in Moscow, where he covered the second Chechen war. He was one of the first journalists to witness the start of U.S. bombing in the Panshir Valley in Afghanistan after 9/11, and covered the invasion of Iraq in 2003. He is currently Newsweek's bureau chief in Moscow, where he lives with his wife and two children.

“Few books say so much about Russia then and now, and its effect on those it touches.” ―Economist

“[A] resonant memoir...Call it irrationality, call it Russian maximalism, but the letters, papers and confidences Matthews inhabits in Stalin's Children rehabilitate all the generations they touch--including his own--showing how their times shaped their choices.” ―New York Times Book Review

“A moving book written with a tender yet unsentimental eye, a deeply intimate account that reveals through the lives of Matthews' own family how the Soviet experience shaped, and destroyed, millions of people.” ―Seattle Times

“At a time when Russia is reasserting itself on the international stage,"Stalin's Children" should be required reading for anyone involved with economic, cultural or political relations with that country.... [A]n epic tale pitting the human spirit against the utopias and the dark realities that shaped Russian governance over three generations.... [A] narrative that moves seamlessly back and forth through history...a timeless portrait of the Russian soul.... All in all Mathews' contribution offers a poignant and insightful reading experience, leaving one with a keener sense of the unseen forces that drive present-day Russia.” ―The New York Post

“Few countries have been haunted more by a terrible past than Russia. In StalinÕs Children Owen Matthews has written of the ghosts of his own family, with grandparents arrested in the Great Terror and his mother consigned to a Soviet orphanage when still an infant. His parentsÕ love for each other, kept alight across the Iron Curtain, makes an extraordinary story. This wonderful memoir brings to life the human victims of a terrifyingly inhuman system.” ―Sunday Telegraph