Items related to Passion and Principle: John and Jessie Frťmont, the... 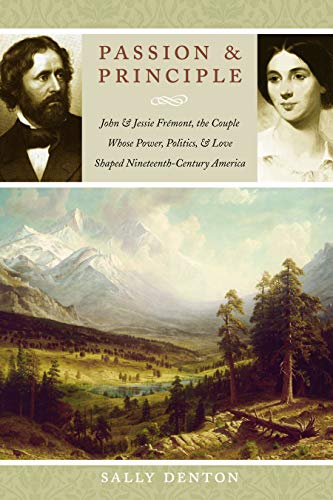 John Charles Frťmont was the illegitimate child of a Virginia aristocrat and a working-class French immigrant; Jessie Benton was the daughter of the most powerful pre-Civil War U.S. senator, Thomas Hart Benton of Missouri, and, her gender notwithstanding, had been groomed as much as any young man to be president. Senator Benton unwittingly brought the two together, never imagining that his daughter would fall in love with Frťmont. Despite their disparate backgrounds, however, John and Jessie’s marriage was one of the most storied events of the nineteenth century.
And indeed, Jessie and John made a formidable couple. Both together and apart they contributed significantly to shaping the United States. He was a key figure in western expansion and the first presidential candidate for the Republican Party. She was a savvy political operator who played confidante and adviser to the highest political powers in the country. Despite their great efforts on behalf of their country, however, their reputations did not survive a Washington smear campaign led by none other than Jessie’s father.
Written with an investigative journalist’s eye for detail and a novelist’s flair, this biography of explorer, politician, and gold-mine owner John C. Frťmont and his intellectual wife, Jessie Benton Frťmont, also casts light on the tumultuous period that forms the backdrop for their lives, from the abolition of slavery to the building of the railroad.

About the Author:
Sally Denton is the author of Faith and Betrayal: A Pioneer Woman’s Passage in the American West and American Massacre: The Tragedy at Mountain Meadows, September 1857. She is the recipient of a Guggenheim Fellowship and her award-winning investigative reporting has appeared in the New York Times, the Washington Post, and American Heritage.
Review:
“An intriguing take on the life and times of John C. Frťmont (1813–1890), explorer of the West, traveling partner of Kit Carson, California senator, unyielding abolitionist and the Republican Party's first presidential candidate (he lost the 1856 election to James Buchanan). This is not a conventional political biography but a portrait of the five-decade-long marriage between Frťmont and Jessie. . . . As Denton shows, Bill and Hillary are not the first American power couple.”—Publishers Weekly (Publishers Weekly)

“A fascinating story of love and struggle . . . sheds light on a character only dimly known; few remember Jessie Frťmont at all, let alone in her roles in the exploration of the West and the battle against slavery. Who knew that expansion and emancipation, the two great projects of nineteenth-century America, were so helped along by someone Lincoln once called ‘quite a female politician’?”—American Heritage (American Heritage)

“[Denton] convincingly refutes popular historiography's perception of John as fortuitously marrying into a politically powerful family and coasting on his wife's talent. The Frťmonts' story stretches from the advent of Manifest Destiny through the Civil War, and Denton tells the tale well, in dense but always readable detail. This original and engaging work is sure to be a boon to historians studying Old West exploration or political entanglements and military actions leading up to the Civil War.”—Library Journal (Library Journal)

“We like to think of so-called power couples as a contemporary phenomenon, but they’ve turned up with fair regularity throughout history. . . . Journalist and historical writer Sally Denton’s fascinating double biography of John C. Frťmont and his wife Jessie Benton makes a convincing case that they ought to be added to the list.”—Los Angeles Times (Los Angeles Times)

“Anyone who has ever imagined living life totally on his or her own terms would do well to study the lessons of Passion and Principle, Sally Denton’s lively revisionist accounting of John and Jessie Frťmont. . . . Denton, whose books include American Massacre and Faith and Betrayal, is a wonderful writer, and was fortunate to have had in the Frťmonts two willing helpmates. . . . Denton handily makes the case for elevating the couple’s stature in the history books.”—New York Times Book Review (New York Times Book Review)

Passion and Principle: John and Jessie Fremont, the Couple Whose Power, Politics, and Love Shaped Nineteenth-Century America (Paperback or Softback)