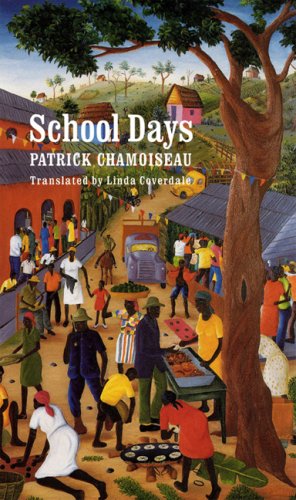 School Days (Chemin-d’Ecole) is a captivating narrative based on Patrick Chamoiseau’s childhood in Fort-de-France, Martinique. It is a revelatory account of the colonial world that shaped one of the liveliest and most creative voices in French and Caribbean literature today. Through the eyes of the boy Chamoiseau, we meet his severe, Francophile teacher, a man intent upon banishing all remnants of Creole from his students’ speech. This domineering man is succeeded by an equally autocratic teacher, an Africanist and proponent of “Negritude.” Along the way we are also introduced to Big Bellybutton, the class scapegoat, whose tales of Creole heroes and heroines, magic, zombies, and fantastic animals provide a fertile contrast to the imported French fairy tales told in school. In prose punctuated by Creolisms and ribald humor, Chamoiseau infuses the universal terrors, joys, and disappointments of a child’s early school days with the unique experiences of a Creole boy forced to confront the dominant culture in a colonial school. School Days mixes understanding with laughter, knowledge with entertainment—in ways that will fascinate and delight readers of all ages.

Martinican author Patrick Chamoiseau has long been a proponent of "Creolity," a literary movement that seeks to preserve the character of Creole language and culture against the threat of assimilation into French ways of speaking and thinking. In School Days, the author transports us back to his childhood, providing a context for the artistic and personal choices he has made as an adult.

The lines are clearly drawn early on in this memoir; young Chamoiseau's teacher, a black Martinican who has adopted both the language and the attitudes of France, is contrasted with the rich cultural and linguistic traditions that thrive outside the school. At school, Teacher lectures on Alexander, Napoleon, the superiority of Western civilization; European fairy-tales about Cinderella and Merlin dominate the classroom while out on the playground, Creole children whisper illicit stories of zombies, water sprites, and flying sorceresses. Light-skinned children become favorites; dark-skinned ones are subjected to Teacher's ridicule; Creole equals shame. The students' sense of confusion is heightened even further when Teacher becomes ill and a substitute takes over the class for a week. This teacher, imbued with the ideals of "Negritude," replaces white with black, strawberry with calabash, Gaul with African, yet remains as dogmatic in his own way as Teacher.

School Days is a ribald, terrifying, ultimately joyful journey through Patrick Chamoiseau's formative years. At the end, the author's younger self begins to master French at last, but he also finds" bit by bit by bit the homey little Creole in his head was joined by scraps of French words, phrases...There was no looking back...." In these lines, Chamoiseau provides a glimpse of the man this boy will eventually become.

Patrick Chamoiseau’s novel, Texaco, won the coveted Prix Goncourt in 1992 and has since been published in fourteen languages. He lives in Martinique. His Creole Folktales recently appeared in a widely praised English translation by Linda Coverdale whose many other translations include Annie Ernaux’s A Frozen Woman.