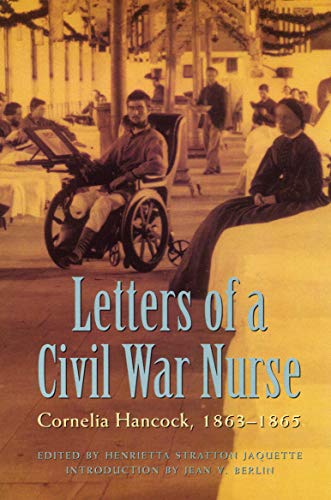 She was called “The Florence Nightingale of America.” From the fighting at Gettysburg to the capture of Richmond, this young Quaker nurse worked tirelessly to relieve the suffering of soldiers. She was one of the great heroines of the Union.

Cornelia Hancock served in field and evacuating hospitals, in a contraband camp, and (defying authority) on the battlefield. Her letters to family members are witty, unsentimental, and full of indignation about the neglect of wounded soldiers and black refugees. Hancock was fiercely devoted to the welfare of the privates who had “nothing before them but hard marching, poor fare, and terrible fighting.”

Originally published in 1937 as South after Gettysburg, Hancock’s letters were edited by Henrietta Stratton Jaquette, the granddaughter of a cousin. This Bison Books edition is introduced by Jean V. Berlin, the editor of A Confederate Nurse: The Diary of Ada W. Bacot, 1860–1863.

"[Hancock’s] war letters offer a historically valuable picture of Civil War campaigns and conditions, and, at the same time, a clear and colorful portrait of a remarkable personality. It is her candor, definiteness and high spirit which combine to give her letters their peculiar interest and value."—New York Times (New York Times)