Items related to The Race of the Golden Apples

Martin, Claire The Race of the Golden Apples

The Race of the Golden Apples 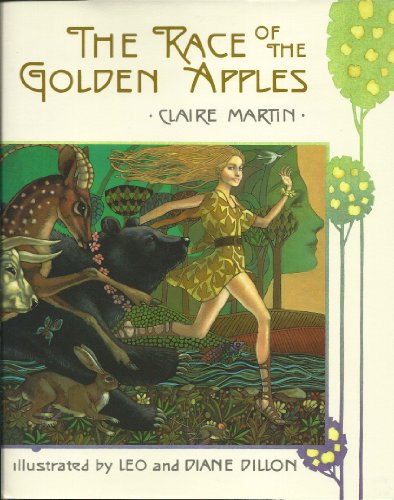 A Greek princess, raised by bears in the forest and then returned to her rightful place in the kingdom, refuses to marry unless the man can outrun her in a footrace

Grade 2-4-- Atalanta, left exposed at birth by a cruel king who wants only sons, is rescued by Diana, the Goddess of the Hunt. Raised by the goddess and Crona, a she-bear, the girl is happy in the forest until a young man, Hippomenes, thinks she is in danger and kills her foster brother, Obrin, a bear and son of Crona. At this, Atalanta conceives a hatred for the human race, which she brings with her when she is returned to her father. When he insists that she marry, she counters that she will only wed a man swift enough to outrun her. Hippomenes will risk everything to win her love, and receives help from Venus to do so. Martin's retelling is clear and romantic, maintaining suspense until the finish line. The Dillons's illustrations are certainly impressive, but are somewhat below their usual standard. While the pastel borders are lovely, the pictures of Atalanta and the rest of the characters seem stiff and lifeless. This may have to do with the generally cool palette, relying largely on teal, or the fact that the acrylic paintings attempt to emulate tapestry. Whatever the reason, there is an occasional awkwardness, a sense of linearity where the line should flow, and in some pictures, proportions are off--arms or legs slightly too long, as if inspired by El Greco. Nonetheless, the book as a whole is arresting, and lacking other picture-book versions of this Greek legend of unstinting love, this is a solid purchase for mythology sections. --Ann Welton, Thomas Academy, Kent, WA
Copyright 1991 Reed Business Information, Inc.

Imposing paintings by the gifted Dillons, two-time winners of the Caldecott Medal, illustrate Martin's debut book: a stylish, lucid retelling of the myth of Atalanta. Deep in the forest, the goddess Diana raises this Greek princess, who was abandoned at birth by her cruel father. The child, who "delighted to swim swift-flowing rivers and ran like the wind," is not pleased when Diana tells her she must return to the kingdom of her aging father, who longs for an heir. But Atalanta goes and reluctantly agrees to marry, on the condition that her intended outrun her in a race--something no one has ever done. Venus comes to the aid of the winning suitor, Hippomenes, who has long been captivated by the princess. Framed by stylized arboreal designs, the Dillons' art is reminiscent of the medieval tapestries that inspired it. Geometric and floral patterns, as well as the fauna and flora of the forest, are rendered in stunning detail, and muted greens and golds contrast strikingly with luminous hues. Ages 4-8.
Copyright 1991 Reed Business Information, Inc.

1. The Race of the Golden Apples

2. The Race of the Golden Apples

3. The Race of the Golden Apples

4. The Race of the Golden Apples Martin, Claire