Items related to Love and Other Foreign Words

Love and Other Foreign Words 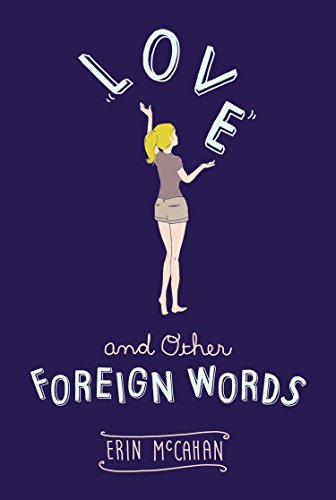 Perfect for fans of John Green and Rainbow Rowell, Love and Other Foreign Words is equal parts comedy and coming of age--a whip-smart, big-hearted, laugh-out-loud love story about sisters, friends, and what it means to love at all.

Can anyone be truly herself--or truly in love--in a language that's not her own?

Sixteen-year-old Josie lives her life in translation. She speaks High School, College, Friends, Boyfriends, Break-ups, and even the language of Beautiful Girls. But none of these is her native tongue--the only people who speak that are her best friend Stu and her sister Kate. So when Kate gets engaged to an epically insufferable guy, how can Josie see it as anything but the mistake of a lifetime? Kate is determined to bend Josie to her will for the wedding; Josie is determined to break Kate and her fiancé up. As battles are waged over secrets and semantics, Josie is forced to examine her feelings for the boyfriend who says he loves her, the sister she loves but doesn't always like, and the best friend who hasn't said a word--at least not in a language Josie understands.

Erin McCahan is an Ohio-dwelling, unabashedly Styx-loving, full-time writer who enjoys a variety of hobbies, excluding role-playing, sticky things, and karaoke. She lives in New Albany, near Columbus, with her husband.

***This excerpt is from an advance uncorrected proof***

There must be a way to figure this out.

I contemplate the possible formulae lying on Stu’s bed, staring at the ceiling but seeing only x’s and y’s and parentheses and question marks. Across the room, Stu sits with his back to me at his keyboard, playing an occasional combination of chords and pausing to write or erase musical hieroglyphics in a notebook.

“That’s what I’ve been saying,” he says.

“I think you can live without knowing this. I know I can.”

I sit up, adjust my glasses, and notice a loose thread in the brick-red stripe of his serape-style blanket.

“You need to fix this before it comes undone,” I say.

“You realize I can never sleep under this blanket with this thread as it is. The thought of it would plague me all night.”

“Were you going to?” he asks, looking over his shoulder at me.

“Suggesting you were going to at some point?”

“Suggesting no matter where I sleep in the future, it will not be under this blanket.”

“I was not aware our friendship included sleepovers,” he says. “Will we be doing each other’s hair as well?”

“Okay, listen to this,” he says, and proceeds to play, to perfection, the gorgeously trilling introduction of one of the greatest songs of all time, “Come Sail Away.” (Words and music by Dennis DeYoung, former lead singer of Styx and now a composer, Broadway performer, and all-around superlative human being. I believe in his spare time he rescues stranded motorists across the country, chases purse-snatchers, and donates blood and plasma until the Red Cross temporarily bans him for his own good. Somewhere in his closet there must be a cape.)

Then Stu sings—and only Stu, as far as my listening experience extends, could do Dennis DeYoung justice, which is the highest compliment I can pay to any singing person. Stu sings in a couple of choirs and is so musically gifted that our high school choir director often consults him on arrangements for musicals and ensembles. I have a mere average singing voice myself, and the utter inability to play any instrument. I took piano lessons when I was nine for the longest six months of my life. The whole thing made no sense to me, and my teacher refused to answer my list of why questions. Why assign fingers to keys? Why include a tie? Why do you need a damper pedal; why not just not play that note? Why won’t you teach me how to tune this thing? Why are there no blue pianos? No, really, why are there no blue pianos?

She and I were very happy the day my parents let me quit.

Just before the tempo of “Come Sail Away” increases, Stu stops singing and breaks into a classical version of the piece, somewhere between a minuet and a concerto, as if Johann Sebastian Himself had composed it. If I were not watching him with my own eyes, I would swear that more than one pianist was playing.

After only one and a half minutes or so, Stu stops and turns on the bench to face me.

“I aim to please,” he says as Sophie shouts from across the hall, “That’s not how it goes!”

“That’s how I say it goes!” Stu shouts back.

“That’s because you are just too freakishly weird!”

“And you are a fluffy poodle!”

“Enough,” their mom says as she leans into Stu’s room. “Josie, are you staying for dinner?” she asks me.

“Thanks, Auntie Pat, but I can’t. Kate’s coming over tonight, and I finally get to grill her about Boyfriend of the Moment, who, by the way, none of us has met yet.”

“Her own good?” Stu and his mom ask simultaneously, which entertains Auntie Pat far more than it does Stu.

“Yes. I need to find out if there’s anything wrong with him, which there probably is, which I say for three reasons.”

Auntie Pat arches her eyebrows at me, skeptical but waiting, something Stu does at times too.

“One”—I hold up my index finger for emphasis—“there’s something wrong with all her boyfriends. Two”—second finger up—“she’s been going out with him for four months and hasn’t brought him around, so she’s probably hiding something. And three, which is related to one, Kate did not receive an ounce of the discernment Maggie got,” I say of our older sister, “when it comes to picking guys who are right for her.”

I cringe, thinking back to homecoming, before I say, “Well, I’m better at picking for Kate than Kate is for herself. You know what it is? I’m not blinded by love the way she is. I take a much more logical approach.”

“You have never liked any of her boyfriends,” Stu says.

“My opinion is informed by the guy.”

“Uh-huh. Tell us again what was wrong with the last one.”

“The guy ate only corn, meat, and chocolate,” I tell Auntie Pat. “See, this is where Kate fails the discernment test. She likes to cook. She also eats loads of cruciferous vegetables. And it would be impossible to cook long-term for a grown man who doesn’t eat any. Therefore, logically, he was not a good match for Kate. I knew they’d break up. All I did was suggest it a little earlier than she was prepared for.”

“What is her boyfriend’s name?” Auntie Pat asks.

“Well, then I hope for Kate’s sake that Geoff-with-a-g enjoys a variety of vegetables,” she says.

“I plan on finding out tonight,” I say. And when Auntie Pat turns to leave, I stop her with: “Did you know there’s a thread coming loose here?”

“Here.” Auntie Pat reaches over me and snaps the thread off as I wince. “All fixed,” she says, and shoots me a quick smile before leaving the room.

I look at my watch. Nearly five thirty. “I have to go.” I hop off the bed, twist my ankle right under me, and crash to the floor.

“Dennis DeYoung would have helped me up,” I say as I rise, pink but uninjured, and straighten my glasses.

“Oh, hey.” I stop in the door. “Jen Auerbach told me today she thinks she likes you.”

I shrug. “She likes lots of guys at present. But, in your case, it doesn’t matter since I told her to stay away from you.”

“You mean in addition to your going out with Sarah Selman at the moment?”

“Yeah, in addition to that.”

“Yes you are!” Sophie calls.

“You’re both wrong,” he says, and plays a few light notes on the keyboard.

“Sarah is your third girlfriend this calendar year. And it’s only March.”

“It’s the twenty-fifth,” he protests. “And the last Tuesday of the month, no less.”

“Still a Tuesday in only the third month of the year. That’s a girlfriend a month, so far.” I hold up three fingers for emphasis. “Need I say more?”

“No, because you’re wrong, and I’d hate for you to keep embarrassing yourself.”

“I’m not wrong,” I say, which is confirmed by Sophie.

I call out a good-bye to Sophie and pause in the kitchen to pet Moses, the Wagemakers’ seventeen-pound cat, who is just allowing me to touch him again after I stepped on his tail last week. Twice.

Sophie is the love-’em-and-leave-’em type too. She and Stu have identical blond hair, long limbs, symmetrical faces, and easy smiles. Stu writes music. Sophie paints— bright collages when she’s happy, bleak landscapes when she’s not. Having known both of them all my life, though, I can say that Sophie, apart from her love life, is much less complicated. Not a fluffy poodle, but also breezily unconcerned with matters that neither interest nor affect her.

No one will ever accuse Sophie of over-thinking, which I, as an inveterate (my dad says incorrigible) over-thinker, admire. I don’t know how she does it. I find her completely fascinating.

Auntie Pat says she and Stu bicker because they’re so close in age. Thirteen months. Stu’s sixteen. Sophie’s fifteen, three months older than I am even though I’m a year ahead of her in school. I skipped second grade, making me a junior at the moment—like Stu.

Auntie Pat predicts by the time Stu and Sophie are thirty and twenty-nine, well involved in their own families and careers and living in separate states, they’ll get along rather well.

My parents have owned our house across the street from the Wagemakers for nearly twenty-two years, which is at least how long Kate and our oldest sister, Maggie, have been calling them Auntie Pat and Uncle Ken.

For this reason, everyone at school thinks Stu and Sophie are my cousins. We let them. It’s easier to perpetuate the rumor than to explain the intricacies of so close a relationship that isn’t family but should be.

I leave the Wagemakers’ house and cross the street. It’s damp and cold, like the air, from typical late March rain. My thoughts return to the dilemma that had taken me out of Sophie’s room, where I had listened, fascinated by her enthusiasm, to her latest break-up drama that included the description “cheese-sniffing rat bastard,” and into Stu’s room, where I tried to create a formula Stu called impossible. But he must be wrong. There should be—there has to be—some way for me to conclusively determine if I, in all my fifteen-point-four years of life, have eaten an entire rat.

1. Love and Other Foreign Words

2. Love and Other Foreign Words