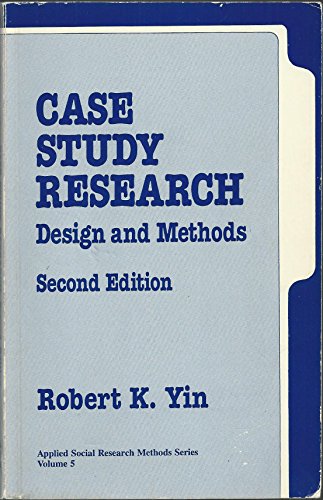 This best-selling book focuses on case study design and analysis as a distinct research tool with wide applicability. It has now been carefully revised, updated, and expanded to include a discussion of the debate in evaluation between qualitative and quantitative research, more on the role of theory in doing good case studies, more extensive discussion of triangulation as a rationale for multiple sources of evidence, and an examination of program logic models as another analytic option. In addition, the text contains many topical examples, including ones dealing with international trade and the world economy. Despite these revisions, this second edition retains virtually all the original text, making it an even more comprehensive introduction to the field.

Robert K. Yin is President of COSMOS Corporation, an applied research and social science firm.  Over the years, COSMOS has successfully completed hundreds of projects for federal agencies, state and local agencies, and private foundations.

Outside of COSMOS, Dr. Yin has assisted numerous other research groups, helping to train their field teams or to design research studies. The most recent such engagements have been with The World Bank, the Division of Special Education and disAbility Research at George Mason University, the Department of Nursing Research and Quality Outcomes at the Children’s National Health System (Washington, DC), and the School of Education, Southern New Hampshire University.

Book Description SAGE Publications, Incorporated. Hardcover. Condition: Good. A copy that has been read, but remains in clean condition. All pages are intact, and the cover is intact. The spine may show signs of wear. Pages can include limited notes and highlighting, and the copy can include previous owner inscriptions. At ThriftBooks, our motto is: Read More, Spend Less. Seller Inventory # G0803956622I3N00

Book Description SAGE Publications, Inc, 1994. Hardcover. Condition: GOOD. Has little wear to the cover and pages. Contains some markings such as highlighting and writing. Supplemental materials are not guaranteed with any used book purchases. Seller Inventory # 0803956622_abe_gd

Book Description Sage Publications, Inc, 1994. Condition: Good. 2nd Edition. Ships from the UK. Shows some signs of wear, and may have some markings on the inside. Seller Inventory # GRP108471010