Items related to Violence and Gender Relations: Theories and Interventions 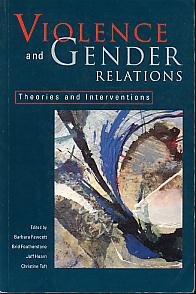 This major contribution to debates on violence and gender relations looks at abusive behaviour as it affects women, men, children and older people. The book is fundamentally concerned with the interrelations of theory and practice. It focuses both on the development of theory and on effective interventions and professional practices, particularly in the fields of social work and social welfare.

While a gendered approach to violence is the central theme of the book, other social divisions and oppressions - such as class, age and race - are analyzed, and their implications for intervention are considered. The book also explores the distinctions and connections between institutional and interpersonal violence. Special a

Jeff Hearn is currently Guest Faculty Research Professor in the Humanities and Social Sciences, based in Gender Studies and the Centre for Feminist Social Studies, Örebro University, Professor of Management and Organization, Hanken School of Economics, Professor of Sociology, University of Huddersfield, and a UK Fellow of the Academy of the Social Sciences.

Jeff Hearn has been strongly involved in North-South and European research and policy collaborations, such as the CROME, CAHRV, genSET, GenPORT, and Study on the Role of Men in Gender Equality EU projects, as well as profeminist and related activism over many years. Review:

`Scholars of social work, public policy, and organization will find the book provocative and useful′ - SIGNS

`In the context of child protection... students who lack first-hand experience will get a lot out of this book and it will certainly give us much to debate′ - Child Abuse Review

`This volume is concerned primarily with men′s continuing violence to women, children and older people, although it also includes analysis of social divisions and oppressions other than gender (class, age and race) and their implications in terms of intervention... [it] deals with a broad range of violent behaviours (including institutional violence)... chapters which are based primarily on new research findings are especially valuable... There are many interesting proposals for interventions and for further research, all based on feminist critique and politics. Overall, all chapters contribute both to the development of theory and to effective interventions and professional practices′ - Theoretical Criminology

`Interesting material is presented. For example [on] child protection work and men′s reluctance to engage with social workers... This volume [goes] some way towards developing current theoretical perspectives which might inform policy and practice′ - British Journal of Social Work