Items related to Vow of Sanctity (A Sister Joan Mystery) 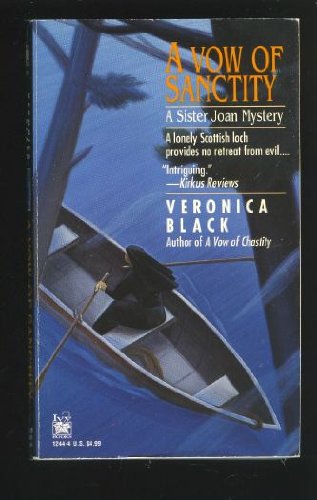 A Sister Joan Mystery.
All is not well on beautiful Loch Morag in Scotland, where Sister Joan is resting at a spiritual retreat. Children make signs to ward off the evil eye whenever she passes. She suspects she is being followed. And in the dark crypt, where the bodies of the dead remain partially preserved, she feels the touch of a live hand.
A tragedy from the past still grips Loch Morag. But that is nothing compared to the evil in the present, when a sudden storm reveals murder -- and Sister Joan must abandon her solitude to ferret out a killer. . .

Plucky and engaging Sister Joan, whose sleuthing was previously chronicled in A Vow of Silence and A Vow of Chastity , leaves her Cornwall convent for a month-long retreat in western Scotland. On excursions from her furnished cave, overlooking a beautiful loch and a nearby monastery which was originally a lookout post from which the natives hoped to spy maurauding Vikings, Joan is greeted with suspicion and hostility by the locals, who are mostly Calvinists. She also uncovers a number of mysteries to ponder when she is not praying. Why did Alasdair McKensie, a Catholic, disappear six years before? Did his wife kill him for having an affair with Catherine Sinclair, wife of the Protestant cleric? And was Catherine's death three months later a suicide or an accident? What of the nocturnal tryst of young Morag Sinclair with a cowled oarsman who could be the considerably older abbot of the monastery? After Joan observes modern shoes on one of the mummifed bodies of the supposedly ancient priests seated in a monastery crypt, the body disappears. Joan's bravery in battling a fierce freak tide leads to the recovery of that body and the unraveling of other puzzles. Her wit, true innocence, humility and joyous spirit win the admiration of villagers and readers alike. Black's other novels include last year's My Name Is Polly Winter.
Copyright 1993 Reed Business Information, Inc.

Sister Joan, sometime sleuth of the order of the Daughters of Compassion (A Vow of Chastity, etc.), is spending the end of summer in a spiritual retreat in remotest Scotland--a one-person cave high above a loch. She's welcomed by members of the nearby monastery and decides to make and present a painting of their church in return for their hospitality. The villagers, mostly non-Catholic, are not so friendly, with the exception of store-owner Dolly McKensie and her son and helper Rory. Dolly's womanizing husband disappeared six years ago--around the time Catherine Sinclair, the local minister's wife, died of an accidental overdose of prescribed drugs. Ever since then, the Sinclairs' sullen, sultry daughter Morag has avoided once best friend Rory. Meanwhile, Sister Joan's painting sessions at the monastery are touched with unease; she senses hidden eyes upon her--a feeling heightened by a strange discovery in the church's crypt. The surfacing, in a sudden storm, of a body in the loch, raises a host of questions. The answers, as quietly ferreted out by Sister Joan, are intriguing but contrived, producing happy but unconvincing endings all round. Nicely done craggy, uncomfortable atmosphere for a benign kind of villainy. -- Copyright ©1993, Kirkus Associates, LP. All rights reserved.