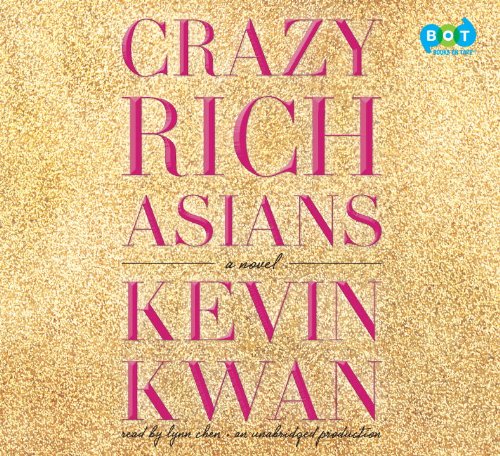 Crazy Rich Asians is the outrageously funny debut novel about three super-rich, pedigreed Chinese families and the gossip, backbiting, and scheming that occurs when the heir to one of the most massive fortunes in Asia brings home his ABC (American-born Chinese) girlfriend to the wedding of the season.
When Rachel Chu agrees to spend the summer in Singapore with her boyfriend, Nicholas Young, she envisions a humble family home, long drives to explore the island, and quality time with the man she might one day marry. What she doesn't know is that Nick's family home happens to look like a palace, that she'll ride in more private planes than cars, and that with one of Asia's most eligible bachelors on her arm, Rachel might as well have a target on her back. Initiated into a world of dynastic splendor beyond imagination, Rachel meets Astrid, the It Girl of Singapore society; Eddie, whose family practically lives in the pages of the Hong Kong socialite magazines; and Eleanor, Nick's formidable mother, a woman who has very strong feelings about who her son should--and should not--marry. Uproarious, addictive, and filled with jaw-dropping opulence, Crazy Rich Asians is an insider's look at the Asian JetSet; a perfect depiction of the clash between old money and new money; between Overseas Chinese and Mainland Chinese; and a fabulous novel about what it means to be young, in love, and gloriously, crazily rich.

Kevin Kwan was born and raised in Singapore. He currently lives in Manhattan. Crazy Rich Asians is his first novel.

As Peik Lin’s car approached the porte cochere of Tyersall Park, Nicholas Young bounded down the front steps. “I was worried you’d gotten lost,” he said, opening the car door.
“We did get a bit lost, actually,” Rachel replied.
“For some strange reason, your grandmother’s house didn’t show up on my GPS,” said Peik Lin, who prided herself on knowing every street in Singapore.
Rachel got out of the car and stared up at the majestic facade before her. “Am I really late?”
“No, it’s OK,” Nick said. “Peik Lin—thanks so much for giving Rachel a lift.”
“Of course,” Peik Lin murmured, rather stunned by her surroundings. She paused, thinking Nick might invite her in for a drink, but no invitation seemed forthcoming. Finally she said as nonchalantly as possible, “This is quite a place—is it your grandmother’s?”
“Yes,” Nick replied.
“Has she lived here a long time?” Peik Lin asked, craning to get a better look.
“Since she was a young girl.”
What Peik Lin really wanted to ask was, Who on earth is your grandmother? “Well, you two have a great time,” she said instead, winking at Rachel and mouthing Call me later. Rachel gave her friend a quick smile.
Nick turned to Rachel, looking a little sheepish. “I hope it’s OK . . . but it’s not just the family. My grandmother decided to have a small party at the last minute because her tan hua flowers are going to bloom tonight.”
“She’s throwing a party because some flowers are in bloom?” Rachel asked.
“Well, these are very rare. They bloom only about once every decade, and only at night. The whole thing lasts just a few hours. It’s quite something.”
“Sounds cool, but now I’m feeling really underdressed,” Rachel said, eyeing the fleet of limousines lining the driveway. She was wearing a sleeveless, chocolate-colored linen dress, a pair of low-heeled sandals, and the only expensive piece of jewelry she owned—Mikimoto pearl studs that her mother had given her when she got her doctorate.
“Not at all—you look absolutely perfect,” Nick replied.
As they entered the house, Rachel was transfixed for a few moments by the intricate black, blue, and coral mosaic tile pattern on the floor of what appeared to be a large foyer. Then, to her amazement, a tall, spindly Indian man standing next to a table clustered with pots of enormous white-and-purple phalaenopsis orchids bowed ceremoniously to her.
“Everyone’s upstairs in the living room,” Nick said, leading Rachel toward a carved-stone staircase. She saw something out of the corner of her eye and let out a quick gasp. By the side of the staircase lurked a huge tiger, mouth open in a ferocious growl.
“It looks so real!” Rachel said.
“It was real,” Nick said. “It’s a native Singaporean tiger. They used to roam this area. My great-grandfather shot it when it ran into the house and hid under the billiard table, or so the story goes.”
“Poor guy,” Rachel said.
“It used to scare the hell out of me when I was little. I never dared go near the foyer at night,” Nick said.
“You grew up here?” Rachel asked in surprise.
“Yes, until I was about seven.”
“You never told me you lived in a palace.”
“This isn’t a palace. It’s just a big house.”
“Nick, where I come from, this is a palace,” Rachel said, gazing up at the cast-iron-and-glass cupola soaring above them. The murmur of party chatter and piano keys wafted down. As they entered the drawing room, Rachel felt momentarily giddy, as if she had been transported back in time to the grand lounge of a twenties ocean liner, en route from Venice to Istanbul, perhaps.

Book Description Random House Audio 2013-06-11, 2013. Audio CD. Condition: Very Good. Item is in very good condition. If supplemental codes/CDs for textbooks are required please contact us prior to purchasing as they may be missing. Seller Inventory # DS-0804127646-2